Coronavirus and the First Amendment 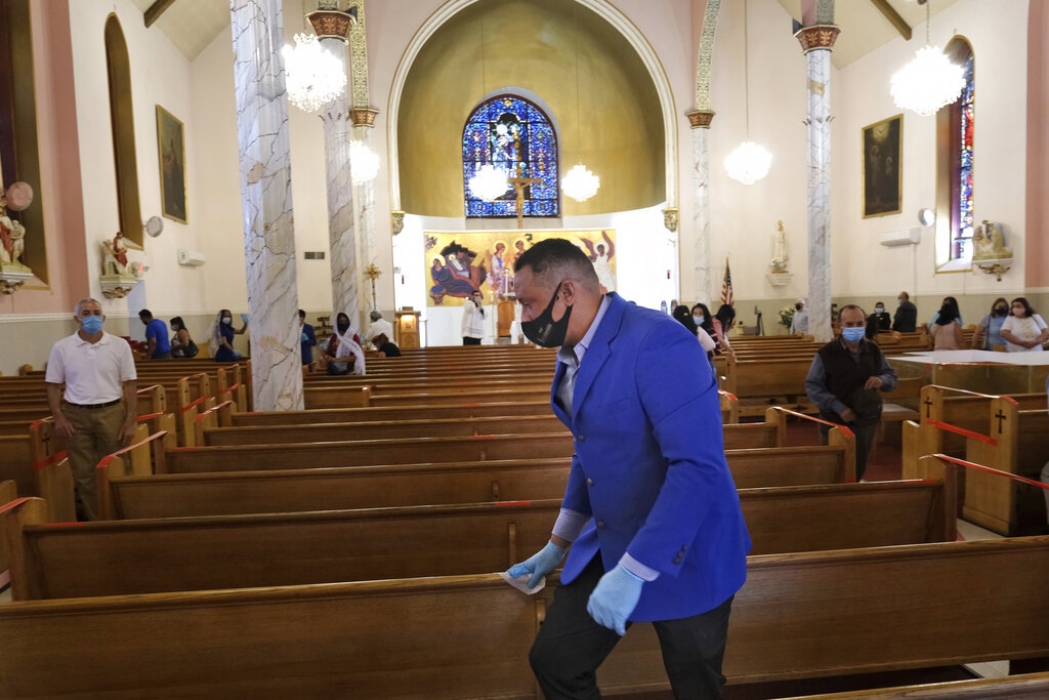 Church services have been the focal point of some religious liberty challenges to coronavirus-related restrictions on the size of gatherings. Here, an usher wipes down pews after a Sunday mass at a New Jersey Catholic church after the state eased its pandemic restrictions in June 2020. (AP Photo/Seth Wenig)

During the COVID-19 pandemic in 2020 and 2021, local, state and federal governmental entities and officials have ordered restrictions on gatherings and, in some cases, have required vaccines to try to lessen the spread of the virus and protect public safety.

Some of these mandates have been criticized, defied and challenged by citizens who believe the government is interfering with their rights, including First Amendment rights to freely exercise their religion or peaceably assemble.

For example, at the beginning of the pandemic in March 2020, a Tampa evangelical pastor held church services in defiance of a local emergency order that largely banned groups of 10 or more from gathering. Sheriff deputies arrested the pastor, the Rev. Rodney Howard-Browne. He was charged with two misdemeanors, but charges were later dropped.

Around the same time, a Baton Rouge, La., pastor, Tony Speel, was charged with violating the governor’s crowd-restriction order after he held Sunday morning services for well over a thousand people. He claimed that his church was helping to handle the pandemic by the laying on of hands of the sick. Speel filed a lawsuit against the state, saying the governor’s order was unconstitutional. State and federal courts struck down the challenge, affirming the governor’s right to issue such orders during a health emergency. The Supreme Court declined to hear the case on appeal.

More than a year and a half later, in September 2021, President Joe Biden created a vaccine requirement for employees of federal contractors and businesses with more than 100 employees, as well as for health care workers. The order allows exemptions for religious and medical reasons. Lawsuits have been filed challenging Biden’s order, including one by a group of federal workers that claims it violates First Amendment religious rights.

The First Amendment guarantees both the free exercise of religion and the right to peaceable assembly. The scholarly consensus appears to be that states and localities have the right to take actions consistent with their state police powers over matters of local health and welfare, which are recognized by the Tenth Amendment to the U.S. Constitution.

For example, in 1905 in Jacobson v. Massachusetts, the U.S. Supreme Court recognized such state powers and upheld a state’s mandatory compulsory smallpox vaccination law over the challenge of a pastor who alleged that it violated his religious liberty rights.

In terms of limiting the size of gatherings during a genuine public health crisis, churches, synagogues, and mosques would be no more exempt than any other institutions from neutral and generally applicable laws designed to protect health.

Russell Moore, the president of the Ethics and Religious Liberty Commission of the Southern Baptist Convention, which has long been committed to the separation of church and state, likened such limits on crowd size to occupancy limits in local fire codes that apply equally to theaters, diners and other buildings.

Restrictions that single out churches could violate First Amendment

However, any laws that single out churches or religious activities for special restrictions would likely violate not only the First Amendment but also the due process requirements in the Fifth and Fourteenth Amendments.

In reviewing state restrictions on gathering sizes during the pandemic in light of the First Amendment, the U.S. Supreme Court has granted injunctive relief in three cases.

Vaccinations and the free exercise clause

As vaccines have been developed to provide immunity against COVID-19, questions have arisen about when the government can require them as a condition of employment, admission to certain large events or attendance at schools.

Although the national government monitors diseases through the Center for Disease Control (CDC), most regulations dealing with issues of health and safety have traditionally been the purview of the states under what are known as state police powers. The Supreme Court’s decision in Jacobson dealt with Massachusetts’ requirement for the smallpox vaccine, not a federal requirement.

President Biden’s vaccination order is to be a regulation enforced by the federal Occupational Safety and Health Administration (OSHA), which is part of the U.S. Labor Department, and is limited to workplaces and only certain employers.

At the state level, government COVID-19 vaccination rules vary greatly, often depending on the political party of the governor.

At least 20 states as of September 2021 have banned or limited local or state government entities from requiring vaccination or proof of vaccination to access services. However, public colleges in other states do require COVID-19 vaccinations for eligible students, with some allowing unvaccinated students to be enrolled if they submit to regular COVID-19 testing.

Vaccine requirements are not new for public educational institutions, which have long required vaccinations as a condition to enrollment for a number of contagious diseases such as measles, mumps, whooping cough, and polio. Often the regulations permit exemptions for religious reasons. Even prior to COVID-19, some clusters of diseases like measles were attributed to those who had refused to have their children vaccinated for religious reasons.

While no major U.S. denomination (including adherents to Christian Science) prohibits its members from getting vaccinated, rights under the free exercise clause of the First Amendment do not depend upon such an affiliation. Moreover, the Constitution does not require that individuals show the validity of their beliefs and rarely requires more than a cursory examination of the sincerity of such beliefs, which can, in any event, be quite difficult to gauge.

Would COVID-19 vaccine requirements by the government be upheld by the Supreme Court if challenged on First Amendment grounds?

The Supreme Court has upheld laws in the face of a First Amendment challenge when the law was neutrally applied, served a compelling state interest, and was the least restrictive means of achieving the state interest.

In 1990 in Employment Division, Department of Human Resources of Oregon v. Smith, the Supreme Court upheld a denial of unemployment benefits to drug rehabilitation counselors who had been fired for ingesting peyote. The employees had argued that since they ingested peyote as part of a religious rite of the Native American Church, it should be protected under the First Amendment. But the court noted that the state was pursuing a legitimate government interest through a neutrally applied criminal drug law.

Concern about the decision prompted Congress to adopt the Religious Freedom Restoration Act (RFRA) of 1993 to boost citizen protection against laws that might infringe on their religious liberty.

However, in 1997, in City of Boerne v. Flores the Supreme Court struck down RFRA’s provisions as they applied to state and local laws while permitting the provisions to continue in relation to federal laws.  The court had said that RFRA violated the principle of separation of powers and upset an important federal-state balance of powers by interfering with states’ traditional authority to regulate the health and safety of its citizens.

John R. Vile is a Professor of Political Science and Dean of the University Honors College at Middle Tennessee State University and the author of A Companion to the United States Constitution and Its Amendments, soon to be published in its 7th edition. Updated September 24, 2021.