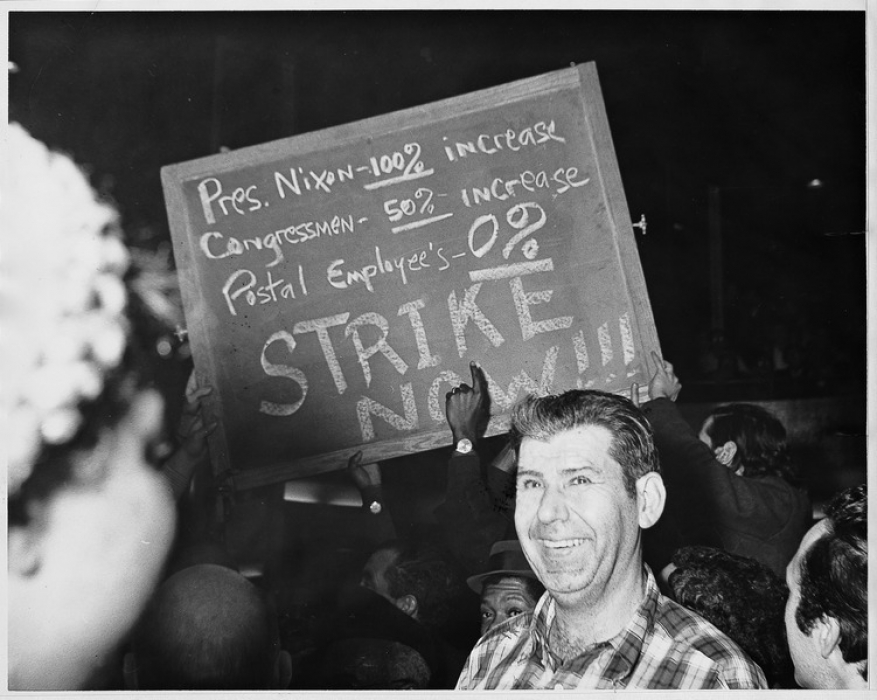 Three non-union mailmen sued a Virginia branch of the National Association of Letter Carriers, accusing the organization of defamation by calling them "scabs" in their monthly newsletter. However, the U.S. Supreme Court ruled in 1974 that the use of the word "scab" was common parlance in union disputes, and said rhetorical hyperbole is protected under the First Amendment. In this 1970 photo, a U.S. Postal worker takes part in strike, demonstrating labor tensions during this period. (Photo via Wikimedia Commons, by APWU Communications, CC BY-SA 3.0)

In Letter Carriers v. Austin (1974), the U.S. Supreme Court reversed three state-court libel judgments arising out of statements in a monthly newsletter referring to non-union workers as “scabs.” The Court reasoned that the use of the term “scab” was protected rhetorical hyperbole rather than unprotected defamatory content.

Old Dominion Branch No. 496 was a local union affiliated with the National Association of Letter Carriers and served as the exclusive collective-bargaining representative for letter carriers in the Richmond, Virginia area. In an effort to acquire more members, the union published in its monthly newsletter – the “Carrier’s Corner” – a list of non-union members under the heading “List of Scabs.”  Henry M. Austin, L.D. Brown, and Roy P. Ziegengest were three non-union members who sued the union after being called “scabs.”

They sued after the letter carriers continued using the term “scab” and published a piece of trade union literature attributed to famed author Jack London that referred to scabs in a very derogatory manner, including: “After God had finished the rattlesnake, the toad, and the vampire, He had some awful substance left with which HE made a scab.”

The three men sued in state court and each obtained jury verdicts of $10,000 in compensatory damages and $45,000 in punitive damages. The union appealed, but the Supreme Court of Virginia affirmed.

Marshall wrote that “one of the primary reasons for the law’s protection of union speech is to insure that union organizers are free to try peacefully to persuade other employees to join the union without inhibition or restraint.”

He cited the Court’s earlier decisions in Linn v. Plant Guard Workers (1966) and New York Times Co. v. Sullivan (1964) for the principle that statements on public issues could not form the basis of a libel action under the principles of the National Labor Relations Act or the First Amendment unless the statements were made with actual malice.

“It should be clear that the newletter’s use of the epithet ‘scab’ was protected under federal law and cannot be the basis of a state libel judgment,” Marshall wrote. The term is actually “common parlance in labor disputes.”

Justice William O. Douglas wrote a concurring opinion, advocating the position that such expression in the context of a labor dispute should be absolutely protected. He wrote that “the First Amendment would prohibit Congress form passing any state libel law and the limitation on labor law formulation is but an example of the general restriction.”

Justice Lewis Powell – joined by Chief Justice Warren Burger and Justice William Rehnquist – dissented. Powell warned that the majority’s decision “appears to allow unions and employers to defame individual workers with little or no risk of being held accountable for doing so.”