By Karen Aichinger
Related cases in Civil Rights Movement and the First Amendment, Speech on Public Property, Freedom of Assembly 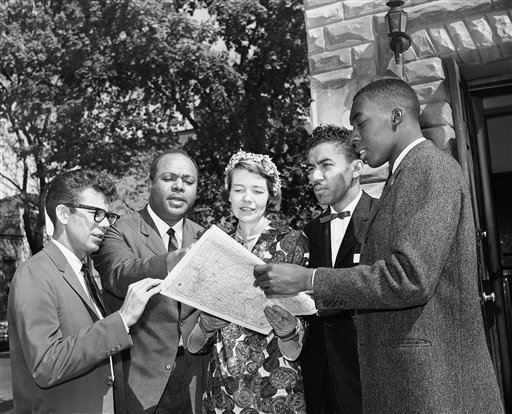 The Rev. B. Elton Cox is shown in this May 4, 1961 Associated Press photo, fourth from the left, as a group of members of Congress of Racial Equality (CORE) made plans for their trip to test segregation in restaurants in the South. In December 1961, Cox helped lead a march of an estimated of 1,500 to 3,800 people in Baton Rouge, Louisiana, in protest of the arrest of 23 members of CORE on charges of illegal picketing. The sheriff told the large group to disperse, then arrested Cox and others on charges of criminal conspiracy, disturbing the peace, obstructing public passages, and picketing before a courthouse. Cox's case went to the Supreme Court, which ruled Cox's right to free speech and assembly were violated. (AP Photo by Byron Rolling used with permission from The Associated Press.)

The Supreme Court in Cox v. Louisiana, 379 U.S. 536 (1965), affirmed that an otherwise constitutionally valid law regulating public demonstrations can be unconstitutional if the statute grants undue discretion to public officials charged with administering and enforcing the statute.

In 1961 in Baton Rouge, Louisiana, Elton Cox led a march of approximately 1,500 to 3,800 people to protest the arrests of civil rights advocates.

The march ended across the street from the courthouse in a location initially approved by the city’s chief of police. Later, the chief told Cox that he and his group had to leave the area. Cox refused, and the police dispersed the crowd with tear gas.

Cox and others arrested on criminal charges

The next day, Cox was arrested for “disturbing the peace,” “obstructing public passages,” and “intent of interfering with . . . the administration of justice.” The Louisiana Supreme Court upheld his conviction.

Cox appealed to the U.S. Supreme Court, arguing that the law was unconstitutional on its face and as applied to him, because it violated the freedom of speech guarantee of the First and Fourteenth Amendments. The Court reversed in a 7-2 vote.

In the opinion for the Court, Justice Arthur J. Goldberg asserted that the Louisiana law defining breach of the peace as any activity that (among other things) is designed “to interrupt” or “to disquiet” was “unconstitutionally vague in its overly broad scope.”

The Court found unconvincing the state’s claim that although the demonstration was not violent, it was “inherently dangerous” and therefore qualified as breach of the peace. Such a definition, Goldberg wrote, “would allow persons to be punished merely for peacefully expressing unpopular views” and thereby defeat the entire rationale of the First Amendment guarantee, which is based on the very notion that “[s]peech is often provocative and challenging” and may have “profound unsettling effects.”

Law allowed some gatherings, prohibited others

Although carefully drawn state regulations on the time, place, and manner of public gatherings, including demonstrations, can be constitutional, the Court observed that the Louisiana law regarding “obstructing public passages” established a blanket prohibition of “all street assemblies and parades,” yet Baton Rouge allowed some gatherings and parades while prohibiting others.

Because there were no “uniform, consistent, and nondiscriminatory” standards for granting exceptions to the general law, the application of the law to Cox was unconstitutional.

On the charge of Cox interfering with the administration of justice, Goldberg noted that the statute in question prohibited picketing “near” a courthouse with the intention of influencing the judicial system.

The Court held that although the Louisiana law reflected a “substantial state interest in protecting the judicial process,” its application to Cox rendered it unconstitutional due to the “degree of on-the-spot administrative interpretation” it gave the police to define the meaning of “near.”

That Cox was first told by the police chief that the site of his demonstration would not be considered “near” the courthouse but later was informed of the opposite could be considered a form of police entrapment — “convicting a citizen for exercising a privilege which the State had clearly told him was available to him.”