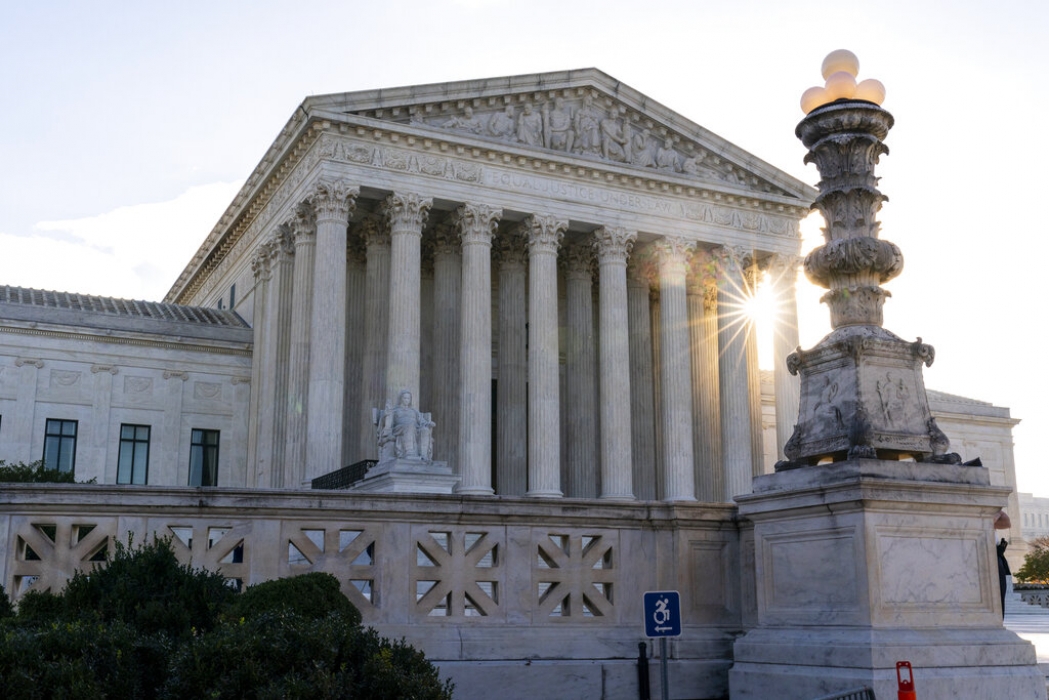 The U.S. Supreme Court ruled in favor of a Georgia Gwinnett College student who had been prohibited from distributing religious literature on campus. The court allowed the court to proceed even though the college argued the case was moot and the student was seeking only nominal damages of $1. (AP Photo/Alex Brandon, File of the U.S. Supreme Court)

Not every constitutional violation has a remedy, but courts can expand or restrict rights by their willingness or unwillingness to provide such remedies. In Uzuegbunam v. Preczewski, 392 U.S. ____ (2021), an 8-to-1 majority of the U.S. Supreme Court eased access for plaintiffs to contest potential violations of First and 14th Amendment speech and religious rights when it allowed an individual to continue a case against a college for $1 in nominal damages. Both a U.S. district court and the 11th U.S. Circuit Court of Appeals had ruled that cases for nominal damages could not proceed where plaintiffs had not also requested compensatory damages.

The case arose when Georgia Gwinnett College, a public institution, prohibited an evangelical student named Chike Uzuegbunam from distributing religious literature outside limited designated areas. When he obtained a permit and began speaking in such a free-speech zone, authorities asked him to stop on the basis that others had complained and that the college prohibited any such speech that “disturbs the peace and/or comfort of person(s).”

Both Uzuegbunam and another student, Joseph Bradford, complied with an order to stop speaking but filed a suit seeking nominal damages and injunctive relief. Although the college initially attempted to defend its actions under the fighting words doctrine, it then changed its policies so that, in its judgment, the case became moot. The Supreme Court had to decide whether the request for nominal damages of $1 continued to keep the case in play.

In a decision written by Justice Clarence Thomas, the Court had to address the perennial issue of standing. Using the traditional test, it decided that the students had suffered “an injury in fact” that was “fairly traceable to the challenged conduct,” but devoted most of its attention to whether Uzuegbunam was seeking a remedy that was “likely to redress the injury.”

The majority sought to settle this issue by examining precedents under the system of common law that the U.S. had inherited from Great Britain.

Thomas found that allowing for nominal damage awards was a way for plaintiffs to obtain a form of “declaratory relief.” Looking particularly at case law around the time of the American Founding, Thomas cited a noted British judge as ruling that nominal damages could be assessed in cases that did not involve monetary damages. He further cited one-time Justice Joseph Story as upholding such nominal damages where “the breach of duty is clear.” Although this rule was not universally followed, Thomas thought that it was “well established.” In so doing, “the common law avoided the oddity of privileging small-dollar economic rights over important, but not easily quantifiable, nonpecuniary rights.”

Thomas denied that nominal damages were “purely symbolic,” concluding that “despite being small, nominal damages are certainly concrete” and are likely to affect the future behavior of the defendant. Thomas thus distinguished nominal damages from the awarding of attorneys’ fees to losing parties. He further emphasized that parties still had to establish standing before being able to claim nominal damages and that Congress had “abolished the statutory amount-in-controversy requirement for federal-question jurisdiction.” This suggests that, if courts found themselves overwhelmed with nominal-damage cases, Congress might provide a remedy by raising the amount of damages required. Because Uzuegbunam had suffered a violation of his constitutional rights, he had a right to proceed with his case for nominal damages.

Chief Justice John Roberts filed a strong dissenting opinion, relying chiefly on jurisdictional considerations based on Article III of the Constitution, which outlines the powers of the judicial branch. He believed that by setting the bar for accepting cases involving nominal damages so low, the Court was eroding the “case-or-controversy” requirement. In one of his more memorable lines, Roberts suggested that the majority was seeking to turn “judges into advice columnists.” He further charged that the majority had failed to distinguish between the design of the English and U.S. systems, the latter of which sought to limit judicial activism, and questioned the majority’s interpretation of English and early American precedents. At the end of the opinion, however, Roberts suggested that the defendant could still moot the claim simply by paying the dollar in nominal damages.

The majority opinion suggests that the current Supreme Court is keeping the door wide open to hear cases from those who believe that government institutions have impinged upon their First and 14th Amendment speech and free-exercise rights.

John R. Vile is professor of political science and dean of the University Honors College at Middle Tennessee State University. This article was published March 12, 2021.