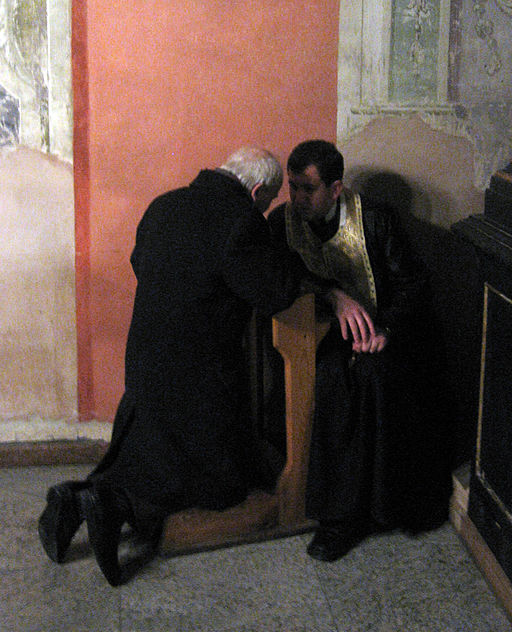 In an early state case about religious freedom, Commonwealth v. Cronin, a Virginia judge ruled that a priest could not be forced to testify about information learned in confessional. Judge John A. Meredith said the goal of the U.S. Constitution and Virginia's bill of rights was to secure "religious toleration" and that a priest who violated the confidentiality of a confessional would be divested of his ordination and expected to do penance for the rest of his life. (Illustration of a Catholic confessional via Wikimedia, CC By-SA1.0)

In his concurring opinion in Fulton v. City of Philadelphia (2021), Justice Samuel Alito Jr. mentioned a number of precedents that he thought called for a reconsideration of the court’s decision in Employment Division, Department of Human Resources of Oregon v. Smith (1990). The Smith ruling has led courts to allow laws that limit the free exercise of religion as long as they were laws of general application and not targeted at specific religions.

One of the precedents was Commonwealth v. Cronin (2 Va. Cir.)(1855) that considered whether a priest could be forced to testify in a criminal trial  about the defendant's wife’s sacramental confessional before she died from injuries inflicted by her husband.  During the trial, the husband's attorney asked the priest whether the woman had acknowledged to him an adulterous affair.

The case cited an earlier decision in People v. Philips (1813) from the state of New York that had exempted Roman Catholic priests from testifying about information that they had heard as part of their sacramental duties in the confessional.

Judge John A. Meredith (1814-1882) of the circuit court that met in Richmond explained that the Rev. Mr. Thuieling, a Roman Catholic priest, had willingly shared what he knew of a deceased woman’s apprehension of her death, albeit without including anything he had learned from the confessional.

Meredith explained that the confessional was one of seven sacraments recognized by the Catholic Church, and that, were a priest to violate the confidentiality of this confessional, he would be divested of his ordination, would be expected to do penance for the rest of his life and might even be subject to eternal punishment. If required by a secular court to reveal such testimony, such an individual would face the “dreadful predicament” of either telling the truth and violating “his ecclesiastical oath,” or lying, or perhaps refusing to testify, and thus violating his “judicial oath.”

Meredith looked to the common law and to the U.S. and state constitutions and bills of rights with their proclamations of “religious toleration” and “free exercise of religious worship” to “see if they do not view with a more liberal eye the religious feelings of our people, and dispense with a more equal hand the universal and immutable principles of Justice.”

Looking first to the common law of England, Meredith noted that although the general rule was that every person was required to testify when called before a court of law, he could not find a single case that specifically addressed whether a priest could be called upon to testify about what he had heard in a confessional. Although Meredith had discovered a civil case in which a priest had been required to testify as to whether a Lord Dunboyne who had purportedly signed a will bequeathing property was or was not a priest at the time (the church did not allow priests to bequeath property), Meredith noted that the case had been misconstrued because it did not involve information the priest had learned from the confessional. Moreover, he cited other English judges who indicated that they would not solicit testimony in such cases.

Turning to the United States, Meredith cited the 1813 New York case tried before Mayor De Witt Clinton of New York.  Clinton and fellow judges had refused to require a priest to disclose information from the confessional in People v. Philip as well as a subsequent case before the same court. Meredith further observed that a number of states including New York, Missouri, Wisconsin and Michigan had specifically exempted evidence acquired through confessionals within their state laws.

Turning to provisions of the U.S. Constitution and the Virginia Constitution and Bill of Rights, Meredith found that the goal of these documents was that of securing “religious toleration” and “the right of every human being to worship God according to the dictates of his own conscience.”  Even if the common law had not secured such a right, the law of the constitution would prevail. Without such protections, the whole system of confession would be undermined, even if such testimony was only permitted in civil cases.

As to claims that such a right would extend only to Roman Catholics, Meredith observed that Protestants “cannot be said to be denied that which they lay no claim to.” He further noted that extending such a privilege to the confessional was analogous to laws that extended similar privileges to conversations that attorneys had with their clients (although he did not mention it, he might also have mentioned conversations between spouses). Absent such a rule, clients would be as unable to be candid with their attorneys as parishioners would be with their priests.

Meredith made it clear that he had not based his opinion on his own theological views but on  upholding religious exercise and that he had concluded that he “shall hold the priest exempt from testifying as to what was confessed to him by the deceased in the administration of the sacrament of penance.”

John R. Vile is  Professor of Political Science and Dean of the University Honors College at Middle Tennessee State University. This article was published June 21, 2021.