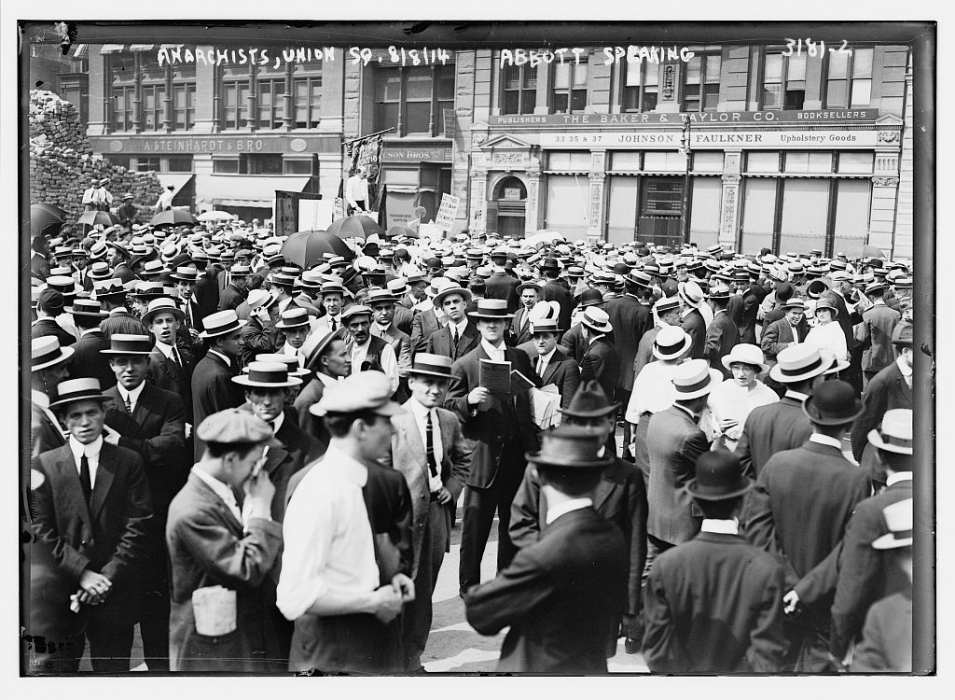 This photograph shows a Socialist anti-war rally against World War I in Union Square, New York City in 1914. During World War I, First Amendment freedoms were restricted. In the landmark case Schenck v. United States (1919), Socialist leaders Charles Schenck and Elizabeth Baer were convicted under the Espionage Act for letters that suggested the draft was a form of involuntary servitude. (Photo via Library of Congress Prints and Photographs Division Washington, public domain)

In the landmark Schenck v. United States, 249 U.S. 47 (1919), the Supreme Court affirmed the conviction of Charles Schenck and Elizabeth Baer for violating the Espionage Act of 1917 through actions that obstructed the “recruiting or enlistment service” during World War I.

The ruling established that Congress has more latitude in limiting speech in times of war than in peacetime and set out the clear and present danger test, in which Justice Oliver Wendell Holmes Jr. indicated that the most stringent interpretations of the First Amendment would not protect a person who causes public panic by shouting “Fire!” in a theater when no fire exists.

Schenck and Baer, members and leaders of the Socialist Party, had been indicted under the Espionage Act for sending literature to recently conscripted soldiers suggesting that the draft was a form of involuntary servitude that violated the Thirteenth Amendment.

Justice Holmes conceded that the letter may have been constitutionally protected “in many places and in ordinary times,” but determined that the character of the writing “depends upon the circumstances under which it is done.” Therefore, “the question in every case is whether the words used are used in such circumstances and are of such a nature as to create a clear and present danger that they will bring about the substantive evils that Congress has a right to prevent.”

Holmes held that the circulated literature created a danger during wartime in that it might lead men to refuse to serve or to desert service.

The decision in Schenck was only one of others providing a basis for regulating the content of speech during wartime.

First Amendment continued to be constrained during war

Later, in Debs v. United States (1919), the Court upheld the government’s authority to punish the delivery of speech under the Espionage Act if the possible effect were to prevent military recruiting. And in Frohwerk v. United States (1919), the Court further upheld the government’s ability to enforce a conspiracy charge under the Espionage Act based on newspaper articles.

For example, in Gitlow v. New York (1925), the majority of the Court used the more restrictive bad tendency test to uphold a conviction under New York’s Criminal Anarchy Law of 1902 for distributing a socialist pamphlet, but Holmes and Brandeis dissented.

Years later, in Dennis v. United States (1951), the Court reformulated the clear and present danger test as the gravity of the evil test to deal with the perceived threat of communism.

In Brandenburg v. Ohio (1969), the Court allowed only for the punishment of illegal action when “such advocacy is directed to inciting or producing imminent lawless action and is likely to incite or produce such action.”