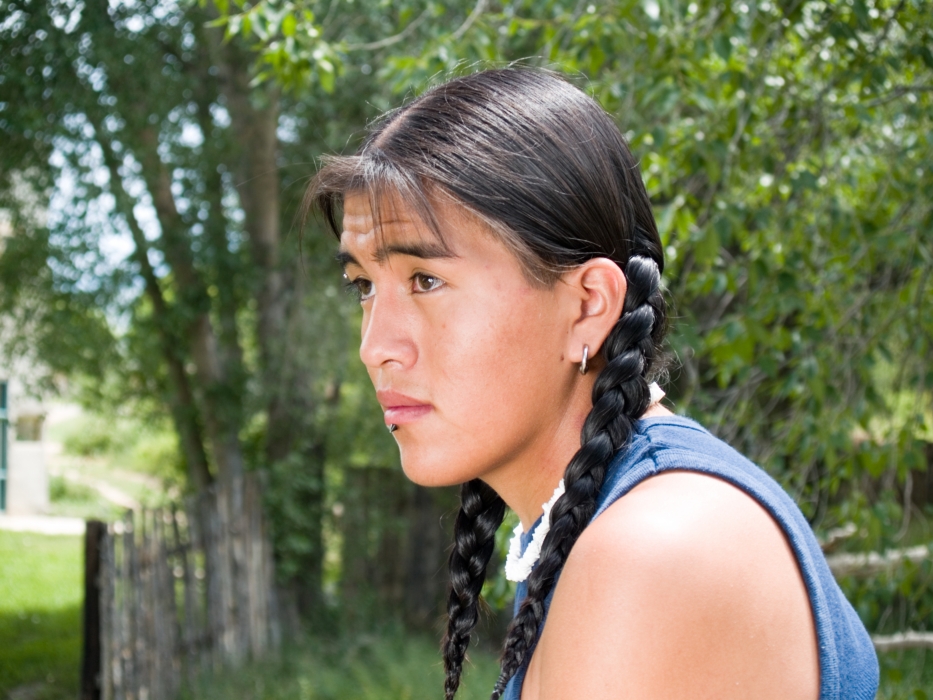 In a case involving Native American students who wanted to wear their hair in braids, Justice William Douglas argued that the Supreme Court should settle lower court disagreements over whether schools could regulate the hair length of students. The students argued their rights of free expression were violated when they were suspended from school under a rule that did not allow hair length that reached a shirt collar or ears. Douglas saw hair length decisions as a personal liberty. (Image of Native American boy, iStock by Getty Images.)

In New Rider v. Board of Education, Pawnee County, Oklahoma, 414 U.S. 1097 (1973), two Supreme Court justices dissented from a denial of certiorari to two Pawnee Indian students who claimed their freedom of expression was violated when they were suspended from school for long hair.

A junior high school in Oklahoma forbid hair that reached a shirt collar or ears.  The students argued that the regulation impinged on First Amendment rights. The students had sought to part their hair in the middle with a long braid on each side as a way of expressing their respect for “old traditional ways” and to “regain their tradition” and to “learn their culture.”

The 10th U.S. Circuit Court of Appeals had upheld the suspension based on testimony from the school superintendent that such rules were rational ways of “instilling pride and initiative among the students leading to scholarship attainment and high school spirit and morale.”

Supreme Court Justice William O. Douglas noted that the court had consistently refused to hear appeals in such cases in which courts had left such regulations in place, including Freeman v. Flake, 405 U.S. 1032 (1972) and Olff v. East Side Union High School District, 404 U.S. 1042 (1972) and others where courts had not. He, along with Justice Thurgood Marshall, argued that the court should put an end to such disparities.

In Olff, Douglas had registered a similar dissent in which he made it quite clear that he did not think that schools had the power to control the length of students’ hair except in exigent circumstances. He cited the court’s ruling in Tinker v. Des Moines, 393 U.S. 503 (1969) that students did not give up their rights upon entering a school. He noted that “hair style is highly personal, an idiosyncrasy which I had assumed was left to family or individual control and was of no legitimate concern to the State.” He likened the decision of one’s hair length to that of the right to decide whether or not to study the German language, which was upheld in Meyer v. Nebraska, 262 U.S. 390.

Douglas further compared the decision of one’s hair length to the “personal liberty” described in Griswold v. Connecticut, the birth control case, and relying in part on the un-enumerated rights specified in the Ninth Amendment. Recognizing that an outbreak of lice might call for a shaving of locks, he thought that the school otherwise had no business interfering.

Subsequent cases have suggested that regulations affecting an employee’s personal grooming, such as the regulations applied to police officers in Kelley v. Johnson (1976), might be subject to strict scrutiny if they interfered with freedom of religion. Similarly, a number of states have adopted laws under the equal protection clause of the Fourteenth Amendment that have banned hair regulations that ban natural hairstyles or styles that are associated with a particular race.

Regulations of hair length are sometimes tied to student dress codes but are arguably more intrusive in that students can change clothes after school but cannot immediately grow their hair back.

John R. Vile is a professor of political science and dean of the University Honors College at Middle Tennessee State University. This article was published Jan. 4, 2021.