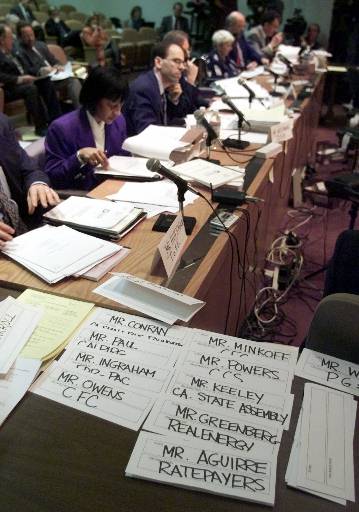 The Supreme Court decision in Pacific Gas and Electric Co. v. Public Utilities Commission, 475 U.S. 1 (1986), is significant because it established, with very few exceptions, the right of a corporation as a publisher to refuse to print messages with which it does not agree. In this photo, a row of namecards sit in the foreground as counsel for both Pacific Gas and Electric and Southern California Edison listen to proceedings during an emergency public hearing on rate hikes at the the Public Utilities Commission in San Francisco, Tuesday, Jan. 2, 2001. (AP Photo/Eric Risberg, used with permission from the Associated Press)

The Supreme Court decision in Pacific Gas and Electric Co. v. Public Utilities Commission, 475 U.S. 1 (1986), is significant because it established, with very few exceptions, the right of a corporation as a publisher to refuse to print messages with which it does not agree.

This free speech case involved documents distributed by Pacific Gas and Electric Company, which sent with its monthly bill a newsletter containing information about utilities, public interest stories, and political editorials. The public interest group Toward Utility Rate Normalization (TURN) sued, arguing that billing envelopes should not be used to distribute political speech because customers were forced to bear this expense. The California Public Utilities Commission found that the extra space in the billing envelopes was the ratepayer’s property, and in an effort to apportion this space, TURN was permitted to use the extra space four times a year with no limitation on its messages except to state that the messages were not those of Pacific Gas and Electric Co.

The decision involved several factors. Does a corporation, as a person, have free speech protections? Because TURN disagreed with Pacific Gas and Electric’s policies, the corporation was forced to disseminate hostile views. Thus, the issue of negative free speech or the protection of “what not to say” was involved in the Court’s interpretation of the First Amendment.

Based on First National Bank of Boston v. Bellotti (1978), the majority affirmed that corporations as individuals are entitled to free speech. This protection extends to the corporation’s newsletter and the space in the billing envelope.

(Justice Rehnquist’s dissent specifically disagrees with this. He argued that corporations do not enjoy the negative free speech rights that individuals and the press enjoy.)

The Court relied on Miami Herald Publishing Co. v. Tornillo (1974), in which the Court decided that compelling a private corporation to provide a forum for views with which it disagreed infringed on the corporation’s free speech rights.

Although the intent of the California Public Utility Commission’s decision was to further free discussion, its effect discriminated on the basis of the viewpoint of the speaker because only those who disagreed with Pacific Gas and Electric were given access to the envelope space. By mandating that the opposing views of TURN be given access, the appellant was compelled to respond to TURN’s arguments. A forced response is antithetical to free discussion under the First Amendment.

Although the state may have a compelling interest in utility regulations, the appellant’s rights cannot be abridged by government restrictions that enhance the speech of its opponents. The Supreme Court held that the California Public Utilities Commission’s decision must be vacated and remanded the decision to the California Supreme Court.

This article was originally published in 2009. Lynne Chandler Garcia is an Associate Professor of Political Science at the U.S. Air Force Academy. Her areas of research include Constitutional interpretations, the concepts of personhood, civil discourse, empathy in political behavior, foreign policy, military operations, and the art of pedagogy for underprivileged learners.