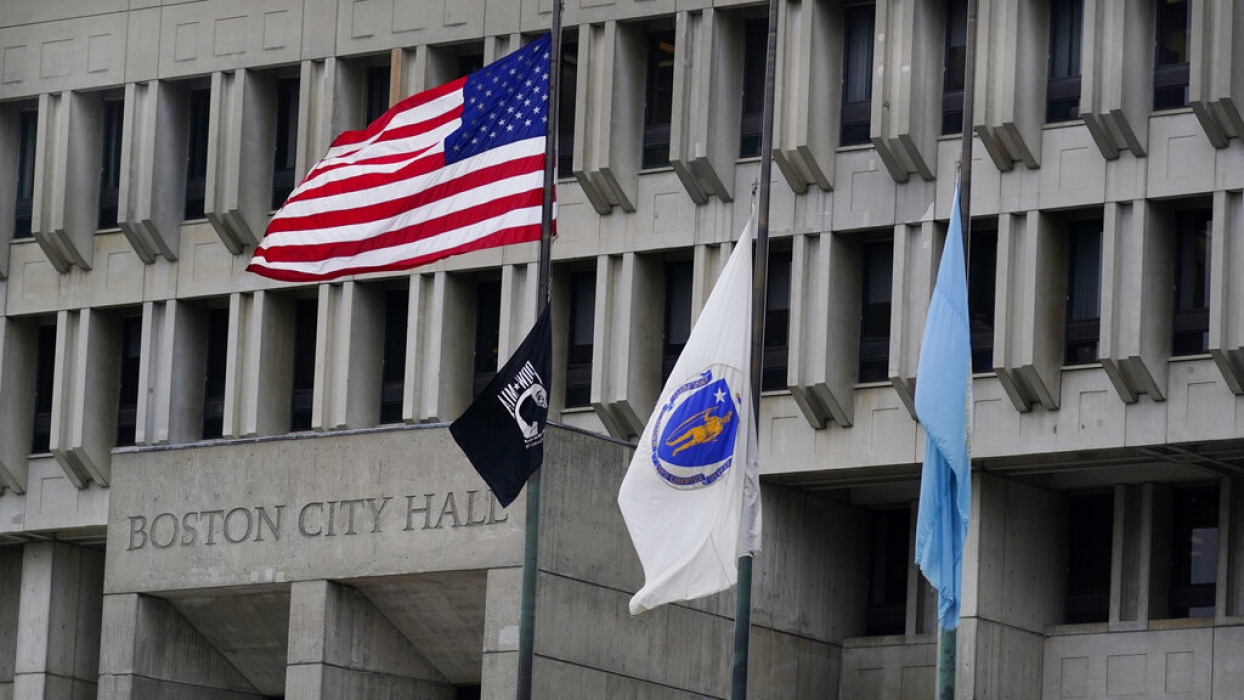 The American flag, the Commonwealth of Massachusetts flag, and the City of Boston flag, from left, fly outside Boston City Hall, Monday, May 2, 2022, in Boston. A unanimous Supreme Court has ruled that Boston violated the free speech rights of a conservative activist when it refused his request to fly a Christian flag on a flagpole outside City Hall. Justice Stephen Breyer wrote for the court Monday that the city discriminated against the activist because of his "religious viewpoint," even though it had routinely approved applications for the use of one of the three flagpoles outside City Hall that fly the U.S., Massachusetts and Boston flags. (AP Photo/Charles Krupa)

In Shurtleff v. Boston, 596 U.S. ___ (2022), the U.S. Supreme Court ruled that Boston violated a private organization’s First Amendment religious free exercise rights by refusing to allow them to temporarily raise a Christian flag on a flagpole outside Boston City Hall, given that Boston had previously allowed various organizations to temporarily raise secular flags on the same flagpole.

The court’s ruling depended on its conclusion that, given Boston’s policies, temporarily raising a flag on this flagpole outside Boston City Hall was an act of private expression, not government speech.

The court’s decision was narrowly applied to the facts in this specific case. The court did not rule that as a general matter raising a flag on a flagpole outside a government building is an act of private expression. On the contrary, the court’s reasoning suggested that usually such acts are government speech.

There are three flagpoles outside Boston City Hall. One flies the United States flag. Another flies the Massachusetts state flag. The third typically flies the Boston city flag. But for many years, Boston has allowed other groups to request to temporarily raise other flags on the third flagpole. Most of the flags have been those of other governmental entities or have been associated with a day of observance in Boston.

In 2017, Harold Shurtleff — on behalf of Camp Constitution, a private organization seeking to “enhance understanding" of the United States’ “Judeo-Christian moral heritage” — requested to temporarily fly “the Christian flag,” which is a flag used to represent Christianity by many Protestant churches and denominations in the U.S.

A U.S. district court and the 1st U.S. Circuit Court of Appeals ruled that Boston was permitted to deny Shurtleff’s request on the grounds that raising the flag was an act of government speech, not private expression, and thus, that Boston was entitled to selectively choose which messages it wanted to promote on its flagpole.

Writing for the majority, Justice Stephen Breyer held that, given Boston’s policies and past practices of allowing many secular groups to temporarily raise flags, such flag raisings were acts of private expression. In reaching this conclusion, Justice Breyer appealed to previous cases dealing with the government speech doctrine, including Pleasant Grove v. Summum (2009), Walker v. Texas Division, Sons of Confederate Veterans (2015), and Matal v. Tam (2017).

In Pleasant Grove and Walker, the court relied on three key considerations in determining whether an act of expression counted as government speech:

Justice Breyer relied on these same considerations in assessing whether temporarily raising a flag on Boston’s third flagpole was government speech or private expression. He claimed that this examination was part of a “holistic inquiry” and that the assessment was “not mechanical.”

Justice Samuel Alito, joined by Justices Clarence Thomas and Neil Gorsuch, filed an opinion concurring in the judgment. Justice Alito argued that the court should adopt a narrower test for determining when something is an act of government speech, writing that “government speech occurs if — but only if — a government purposefully expresses a message of its own through persons authorized to speak on its behalf, and in doing so, does not rely on a means that abridges private speech.”

Justice Kavanaugh filed a brief concurrence in which he stated that the Boston city official who worried that Boston would violate the establishment clause by temporarily raising the Christian flag was mistaken.

Justice Gorsuch, joined by Justice Thomas, filed a longer concurrence arguing that Boston had erred in denying Camp Constitution’s request by implicitly relying on the sort of reasoning that had been put forward in the court’s Lemon Test for resolving establishment clause cases.

Justice Gorsuch argued instead for an originalist approach to the establishment clause that placed a greater emphasis on historical understandings about the relationship between religion and the state.

This article was published May 5, 2022. Mark Satta is assistant professor of philosophy at Wayne State University.