Picketing Outside the Homes of Judges and Justices 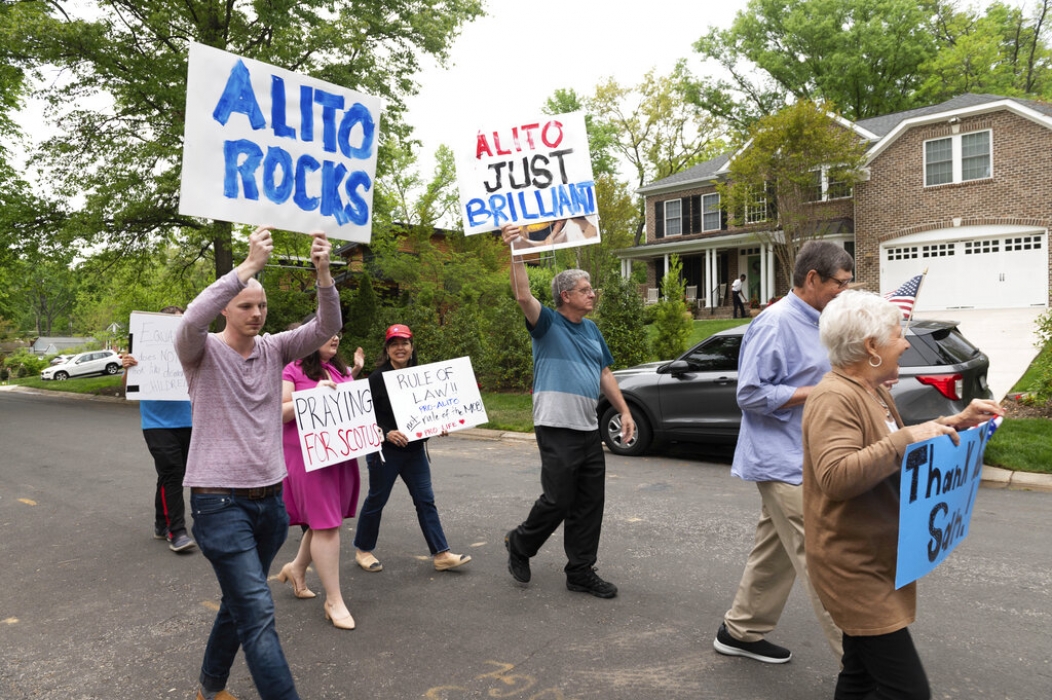 Demonstrators show their support for Justice Samual Alito outside his home, background, on Thursday, May 5, 2022, in Alexandria, Va. A draft opinion suggests the U.S. Supreme Court could be poised to overturn the landmark 1973 Roe v. Wade case that legalized abortion nationwide, according to a Politico report released Monday. Whatever the outcome, the Politico report represents an extremely rare breach of the court's secretive deliberation process, and on a case of surpassing importance. (AP Photo/Kevin Wolf)

The extraordinary leak of Justice Samuel Alito’s draft opinion in Dobbs. v. Mississippi Department of Health in May of 2022, which, if it sticks, will overturn Roe v. Wade (1973), raises numerous constitutional issues. These include its effect on the doctrine of adherence to precedents (stare decisis), the degree to which Congress might seek to intervene in a matter that Alito thinks should be governed by state law rather than by judicial decree, and the effect that the court’s opinion might have on the prestige and authority of the Court in general.

The public reaction has also renewed a First Amendment question that has been generated as protestors have gathered outside the private homes of Justice Brett Kavanaugh, Chief Justice John Roberts (who does not appear to have signed onto the opinion), and Alito. Governors of both Virginia and Maryland have called upon Attorney General Merrick Garland to enforce a federal law adopted in 1950 that prohibits demonstrations “with the intent of influencing any judge.”

Whoever, with the intent of interfering with, obstructing, or impeding the administration of justice, or with the intent of influencing any judge, juror, witness, or court officer, in the discharge of his duty, pickets or parades in or near a building housing a court of the United States, or in or near a building or residence occupied or used by such judge, juror, witness, or court officer, or with such intent uses any sound-truck or similar device or resorts to any other demonstration in or near any such building or residence, shall be fined under this title or imprisoned not more than one year, or both. (18 U.S. Code § 1507 - Picketing or parading)

This law might be particularly applicable to Dobbs in that the court has not yet issued a final opinion, and justices could arguably still be making up their minds. Moreover, unlike legislators and executive officials, federal judges are appointed rather than elected and vested with life terms in part to insulate their decisions on constitutionality from direct public pressure.  After the son of U.S. District Judge Esther Salas was killed by a disgruntled attorney at her home, she has pushed for a law restricting access to personal information about judges as a way of protecting their personal safety, and Congress is considering specifically authorizing federal marshals to protect Supreme Court justices.

A Supreme Court decision in Cox v. Louisiana (1965) suggests that laws designed to insulate judges’ homes might be valid as long as they do not vest undue discretion in the police, as, for example, protecting anti-abortion but not abortion-rights demonstrators. Moreover, in Frisby v. Schultz (1988), the Court has upheld a residential picketing ban that targeted specific residences.

English common law precedents have long identified one’s home as “one’s castle.”  The Third Amendment singles out private homes for special protection against quartering soldiers there, and the Fourth Amendment is particularly solicitous of “persons, houses, papers, and effects.”

Ironically, the cases that impinge most directly on this subject involve anti-abortion demonstrations outside clinics that provide for abortions and the residences of those who work there.  Perhaps recognizing that the lives of some doctors who had performed abortions had been targeted, in Madsen v. Women’s Health Center, Inc. (1994), the Supreme Court indicated that governments could impose reasonable time, place, and manner restrictions by placing 36-foot buffer zones around clinic entrances and driveways to limit demonstrations, but that a wider 300-foot zone around both the clinic and residences imposed an undue burden on such speech.

The irony of the situation is that the court appears to have issued its decision in Roe v. Wade in hopes that it might tamp down political controversy. Those willing to picket clinics and take to the sidewalks in front of the justice’s homes appear to confirm that the case did not do so.  After more than 50 years, it now appears that the issue will once again largely rest in the hands of state legislatures who may or may not succeed in effectively stopping such an intimate personal decision, especially if neighboring states remain willing to permit abortion services.

This article was published May 13, 2022. John R. Vile is a Professor of Political Science and Dean of the University Honors College at Middle Tennessee State University and the author of "A Companion to the United States Constitution and Its Amendments."