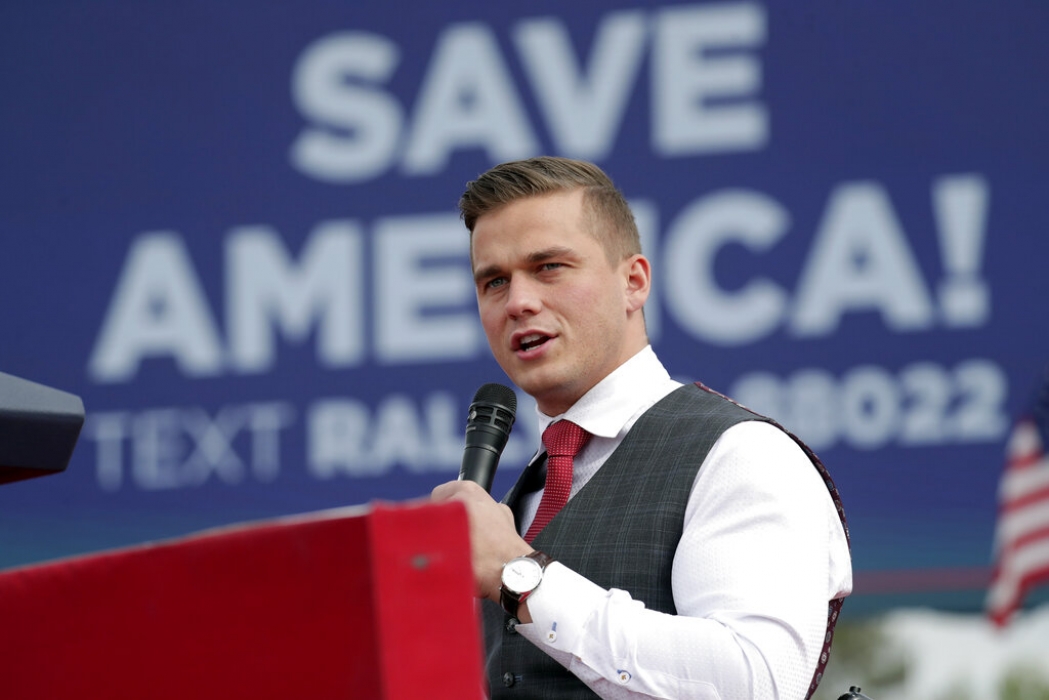 Constituents of Rep. Madison Cawthorn, R-N.C., challenged his right to run for reelection, contending his involvement with people who stormed the Capitol on Jan. 6, 2021, amounted to "insurrection or rebellion" and disqualified him under Section 3 of the 14th Amendment. Cawthorn argued that the First Amendment protected his right to run for office and also said he was covered under the Amnesty Act of 1872, which was passed as part of Reconstruction following the Civil War. The U.S. 4th Circuit Court of Appeals ruled that the amnesty act did not apply to Cawthorn but the court did not address the First Amendment issue. Cawthorn eventually was on the ballot again, but lost to his Republican primary challenger in 2022. In this photo, Cawthorn appears at a rally with former President Donald Trump on April 9, 2022 in Selma, North Carolina. (AP Photo/Chris Seward, File)

In a case involving a North Carolina congressman’s right to run for reelection, the 4th U.S. Circuit Court of Appeals ruled that amnesty given to people who rebelled against the United States in the Civil War did not apply to those who might be found to have participated in the U.S. Capitol Riot on Jan. 6, 2021.

Section 3 of the 14th Amendment, added after the Civil War, disqualifies from state or federal political office those who have “engaged in insurrection or rebellion against” the United States. Four years after the addition of the amendment, Congress passed the 1872 Amnesty Act, relieving all but the highest-ranked of the secessionists of Section 3's penalty.

Some of U.S. Rep. Madison Cawthorn’s constituents argued his involvement with the Capitol rioters disqualified him and sought to have him removed from the ballot. Cawthorn said that he was covered under the 1872 amnesty law and that state administrative proceedings designed to bar him from running for reelection impermissibly burdened his First Amendment right to run for political office.

Although the decision in Cawthorn v. Amalfi (No. 22-1251, 2022) focused chiefly on an interpretation of the 1872 law and on whether states had the same authority to exclude insurrectionists from the ballot as Congress had to exclude them from membership once they were elected, the degree to which the First Amendment protects the right of candidates to run from office remains largely unsettled.

Constitution minimizes restrictions on who can run for office

In “A Constitutional Right to Candidacy,” scholar Nicole A. Gordon notes that the framers attempted to minimize restrictions on the electoral process. At the Constitutional Convention of 1787, James Madison observed that “[t]he qualifications of electors and elected were fundamental articles in a Republican Govt, and ought to be fixed by the Constitution. If the Legislature could regulate those of either, it can by degrees subvert the Constitution. A Republic may be converted into an aristocracy or oligarchy as well by limiting the number capable of being elected, as the number authorized to elect” (“The Records of the Federal Convention of 1787" by Max Farrand).

The U.S. Supreme Court decision in Powell v. McCormack, 395 U.S. 486 (1969), accordingly decided that the age, citizenship, and residency qualifications of members of the U.S. House of Representatives in Article I, Section 2 of the Constitution are exclusive and that Congress must seat winning candidates with such qualifications, although it may expel them for improper behavior by a two-third majority.

Moreover, in Footnote four of the court’s decision in United States v. Carolene Products Company, 304 U.S. 144 (1938), it indicated that it would pay special attention to legislation “which restricts those political processes which can ordinarily be expected to bring about repeal of undesirable legislation . . . to more exacting scrutiny” than other types of legislation.

Because states retain power over the “Times, Places and Manner of holding Election for Senators and Representatives” under Article I, Section 4 of the Constitution, however, it routinely prescribes minimum age and residency requirements for individuals to vote or to qualify to be listed on such ballots, or both. The precise boundaries of state powers are unclear. Moreover, the right to appear on ballots affects not only candidates who want to run but voters who might want to vote for them. Supreme Court decisions that have recognized voting as a fundamental right might therefore be applicable.

Candidate’s right to run linked to freedom of association

First Amendment arguments for the right of a candidate to appear on the ballot are generally tied to the rights of freedom of expression and association, which are often, in turn, tied to the right to form political parties.

Gordan has observed that decisions that have protected political speech under the First Amendment would logically appear to apply to ballot access. In Williams v. Rhodes, 393 U.S. 23 (1969), the Supreme Court accordingly struck down an Ohio law that made it difficult for electors of presidential third-party candidates to be listed on the ballot.

Other decisions have struck down unreasonable fees to run for public office. Although it relied on the equal protection clause of the 14th Amendment, rather than the First Amendment, in Bullock v. Carter, 405 U.S. 134 (1972), the Supreme Court invalidated a Texas law requiring candidates to pay $8,900 to run for office, specifically noting that “the rights of voters and the rights of candidates do not lend themselves to neat separation; laws that affect candidates always have at least some theoretical, correlative effect on voters.”

One specialized area relating to ballot access involves the rights of public employees to declare their candidacy and to criticize employers during their campaigns. In examining lower court precedents, Ross Staine, in “First Amendment Protection for Political Candidacy of Public Employees” in 2013. observed that “One circuit recognizes protection for candidacy, two do not, and three protect candidacy announcements as a form of expression.”

In dealing with public employees, the court often utilizes the test articulated in Pickering v. Board of Education, 391 U.S. 563 (1968) and refined in Connick v. Myers, 461 U.S. 168 (1983). These cases established that retaliation against public employees was inappropriate when the employees were expressing opinions about matters of public concern and did not unduly disrupt the work environment. The second prong of this test is necessarily fairly fact-specific leaving considerable ambiguity.

Cawthorn, in the end, was allowed to run for office in 2022 but lost in the primary to his Republican challenger.

John R. Vile is a professor of political science and dean of the University Honors College at Middle Tennessee State University. This article was published May 31, 2022.