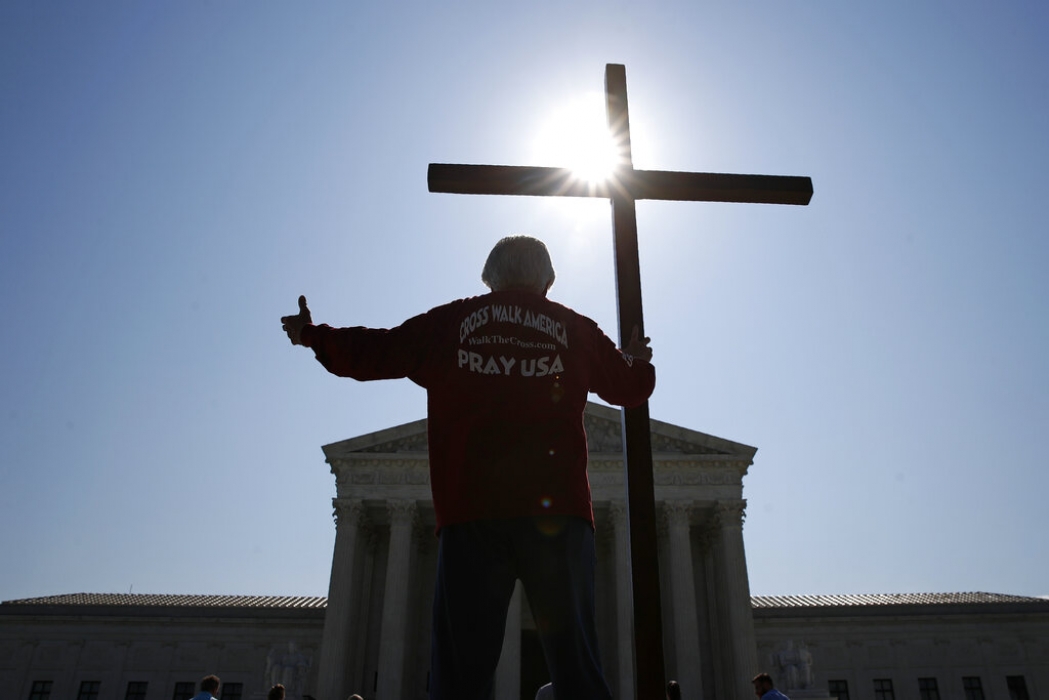 The Supreme Court ruled in 2022 that a Maine law that prevented state tuition assistance from being used at religious schools violated the free exercise of religion by parents. (In this photo, a man holds a cross as he prays prior to rulings in 2020 outside the Supreme Court. AP Photo/Patrick Semansky)

In Carson v. Makin, 596 U.S. ____ (2022), the U.S. Supreme Court decided that Maine could not exclude families who send their children to religious schools from its state-funded tuition reimbursement program. The program pays for children who live in rural school districts without a public school at their grade level to attend a private school or a public school in another district.

The 6-3 decision clarified the court’s thinking on the relationship between the First Amendment’s guarantee of free exercise of religion and its prohibition of state-supported religion in the establishment clause, sometimes referred to as the separation of church and state.

The case arose from a Maine law designed to uphold the state constitutional provisions for separation of church and state. The law originally allowed tuition assistance for qualifying children who went to any private school approved by the New England Association of Schools and Colleges or by the state. In 1981, however, the state amended the law to allow aid to go only to “nonsectarian” schools, a sectarian school being one that is run by a religious entity and promotes education through the lens of faith.

The families who brought the case against the state had chosen to send their children to religious-based schools and thus did not qualify for tuition help. Both a U.S. district court and the U.S. First Circuit Court of Appeals upheld the state restriction as a legitimate means of upholding the separation of church and state.

He relied chiefly on two previous decisions in his ruling:

Roberts believed that these cases established the principle that laws that sought to treat religious schools differently from other private schools were subject to strict scrutiny, a form of judicial review that requires the government to show a compelling interest in a law presenting constitutional questions and prove it had narrowly tailored the law to meet that interest.

He also believed the previous cases established that a “neutral benefit program in which public funds flow to religious organizations through the independent choices of private benefit recipients does not offend the Establishment Clause.”

Moreover, any state interest in providing for an even greater separation of church and state than that provided in the First Amendment’s establishment clause must not infringe the free exercise clause, he said.

While the dissenting opinion by Justice Stephen Breyer stressed the importance of “government neutrality” when it comes to religious matters,  Roberts wrote, "there is nothing neutral about Maine’s program. The State pays tuition for certain students at private schools—so long as the schools are not religious. That is discrimination against religion. A State’s antiestablishment interest does not justify enactments that exclude some members of the community from an otherwise generally available public benefit because of their religious exercise."

Roberts did not believe that the state was limited to providing funds only to schools that provided a public secular education, especially when the choice of schools was made by parents. He also rejected the argument that this case could be distinguished from prior Supreme Court rulings on the basis that the restriction was “use-based” rather than “status-based.”

He further distinguished this case from Locke v. Davey, 540 U.S. 712 (2004), in which the court had ruled that a state was not required to provide scholarship funding to individuals specifically studying for the ministry.

Responding to criticism that the decision might mean that “Maine must fund religious education,” Roberts said that the decision simply prohibited religious discrimination. He noted that the state still had the option to “expand the reach of its public school system, increase the availability of transportation, provide some combination of tutoring, remote learning, and partial attendance, or even operating boarding schools of its own.”

Breyer's dissenting opinion was joined by Justice Elena Kagan, and, in part, by Justice Sonia Sotomayor. Whereas Roberts focused chiefly on the free exercise clause, Breyer focused on the need to allow for play in the joints between the seemingly absolute language of the free exercise of religion clause and the establishment clause to achieve neutrality.

He observed that “it may be difficult to determine in any particular case whether the Free Exercise Clause requires a State to fund to fund the activities of a religious institution, or whether the Establishment Clause prohibits the State from doing so.” Breyer was particularly concerned about the risk that state aid to religious institutions would raise the potential for “religious strife.” He cited both Thomas Jefferson and James Madison to this effect.

Consistent with his emphasis on play in the joints of the two religion clauses, Breyer distinguished between allowing a state to decide to provide tuition assistance to parochial schools and requiring them to do so (the difference between “may” and “must”).

He pointed out that the schools to which Maine had denied funds had clear religious goals that not all citizens would accept. He further feared that state attempts to inquire into their religious teachings would clearly violate the establishment clause.

Sotomayor: Decision dismantles wall of separation between church and state

Justice Sotomayor’s separate dissent viewed this decision as a continuing attempt “to dismantle the wall of separation between church and state that the Framers fought to build.”

She further traced this development to what she believed to have been the court’s incorrect opinion in Trinity Lutheran Church of Columbia Inc. v. Comer (2017). Like Justice Breyer, she accepted the distinction between denying funds on the basis that they were for sectarian purposes rather on the basis that they were being given to parochial institutions. She ended her opinion by expressing increased concern for the direction that the court was taking in what she considered to be undermining the establishment clause.

A range of groups criticized the ruling, from the Baptist Joint Committee for Religious Liberty to the American Atheists.

"The Court’s decision to require Maine to fund religious instruction threatens our nation’s commitment to religious freedom and the understanding of church-state separation that protects it," said Holly Hollman, general counsel of the Baptist religious liberty organization. "Forcing taxpayers to fund religious education undermines the secular nature of our government and the freedom of religious institutions to engage in ministry without government interference."

The American Atheists organization was concerned about the erosion of protections offered by separation of church and state, particularly for atheists and members of minority religions.

"This ruling considers Christian schools qualified to replace a religiously neutral education in Maine counties that are too rural to maintain their own secondary schools. This harms Maine families, especially atheists, and religious minorities, and all families and children who wish to be free from religious proselytizing by members of another religious group," the organization said in a statement.

However, First Amendment scholar Illya Soman said he thought the court got it right. He noted Maine still had control over curriculum and requires all schools in its program meet certain standards.

"Under Tuesday’s decision, the state remains free to restrict vouchers to schools that fail to meet curricular standards that apply equally to both religious and secular schools — even if those standards go against the beliefs of some of them," Soman said in a column published by NBC News. "For example, it might require recipient schools to teach students the theory of evolution despite the fact that some religious groups reject it. It could also bar funding to schools that discriminate on the basis of race, sex and sexual orientation, even though some faith traditions advocate those practices."

Meanwhile, Lindsay Crete, a spokewoman for Maine's governor, said the state will review the ruling. She noted to the Bangor Daily News that last year, in anticipation of the ruling, the governor signed a new law ensuring that religious schools do not discriminate against employees or students based on gender identity.

Bangor Christian Schools and Temple Academy in Waterville, the two schools at the center of the lawsuit, have said that they would not change policies to accept state funding, reported the Bangor newspaper. They do not hire gay or transgender teachers and would not admit students who identify that way.

This article was published on June 21, 2022. John Vile is a professor of political science and dean of the Honors College at Middle Tennessee State University. He is co-editor of the Encyclopedia of the First Amendment.