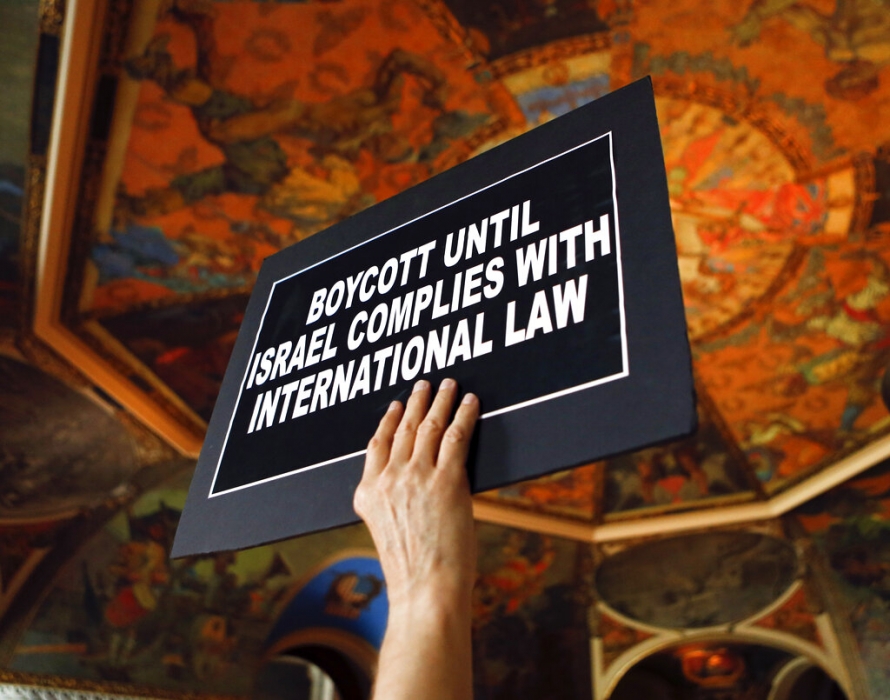 The 8th U.S. Circuit Court of Appeals upheld an Arkansas law that prohibited government contracts with entities that refused to not boycott Israel. The Arkansas Times news organization refused to sign a pledge and lost business from a local state college. It challenged the law as violating free speech protections under the First Amendment. The federal appeals court said the law did not bar expressive speech, only commercial activity, and upheld the law. The Arkansas Times publisher said after the ruling that his organization would still not sign the pledge. (In this file photo, a person holds a sign at a 2016 rally in New York expressing support for boycotting Israel, AP Photo/Mike Groll.)

In Arkansas Times v. Waltrip, ___F.4th ___ (2022), an en banc session of the 8th U.S. Circuit Court of Appeals overturned a previous 2-1 ruling by the same court in a case of the same name, 988 F.3d 453 (2021), and upheld an Arkansas law that forbade public contracts with organizations that were boycotting Israel.

It did so in the face of First Amendment free speech and association challenges by narrowly construing the law so that it did not forbid contracts with organizations that simply expressed public support for a boycott.

Arkansas law bars government contracts with those who boycott Israel

The case arose when the Arkansas Times lost a contract with The University of Arkansas-Pulaski Technical College because the Times refused to give assurances that it would not support a boycott of Israel. The news organization argued that the Arkansas law required an “unconstitutional condition” and “compelled speech.”

The case centered on whether a portion of the law that prohibited “other actions intended to limit commercial relations with Israel” included speech. A U.S. district court had ruled that boycotts were not protected by the First Amendment.

Citing the flag-burning decision in Texas v. Johnson, 491 U.S. 397 (1989), Kobes acknowledged that the First and Fourteenth amendments protect “nonverbal conduct that is intended to be, and likely to be understood as, expressing a particularized message.” He further noted that protections for freedom of speech included “imposing unconstitutional conditions that chill or deter speech,” or “making government benefits contingent on endorsing a particular message or agreeing not to engage in protected speech.”

In deciding if the Arkansas prohibition on boycotting Israel included protected expression, the majority relied on N.A.A.C.P. v. Claiborne Hardware Co., 458 U.S. 866 (1982), where the court had upheld the right to boycott while allowing prosecution for violent conduct. It also cited Rumsfeld v. FAIR, 547 US547 U.S. (2006) in which the court had upheld the Solomon Amendment, which permitted the government to withdraw federal funding from institutions that prohibited military recruiters on their campuses, while still giving them permission to express opposition to the military’s “Don’t ask, don’t tell” policies.

The court attempted to interpret the law, if possible, as the state’s highest court would have done and in a way that would affirm its constitutionality. Under the legal principle of ejusdem generis (of the same kind), general words in a statute that follow more specific words “are construed to embrace objects similar in nature to those objects enumerated.”

Since the opening words of the statute dealt with “commercial activities,” then so should those that followed. Moreover, the legislature has specifically justified the law as protecting state businesses that could lose out if they failed to do business with Israel and therefore depress the state economy. The law thus properly targeted the “unexpressive aspect of the contractors’ conduct, that is, the boycott, rather than requiring or forbidding speech per se.”

Judge Jane Kelley, who had written the circuit’s earlier 2-1 opinion saying the same law was unconstitutional, now dissented. Her own interpretation of the statute focused on legislative intent, which she believed had been designed “to prohibit commercial and expressive behavior.” She believed that the latter restrictions were unconstitutional because they were designed to “leverage funding to regulate speech outside the contours of the program itself.”

The American Civil Liberties Union vowed to appeal the decision, which could also be affected if the state boycott policy were interpreted as conflicting with national policies toward Israel in violation of the Supremacy Clause of Article VI of the Constitution.

Arkansas Times publisher Alan Leveritt responded to the decision in comments published on the news organization's website. "We are obviously disappointed and note that these laws, which were originally passed in over 30 states, have been overturned in every court except this one. We consider being banned from doing business with our state government for refusing to sign a pledge not to boycott Israel a ridiculous government overreach that has nothing to do with Arkansas. More importantly, in our particular case it requires the Arkansas Times to take a political position in return for advertising. We don’t do that. I acknowledge that this ruling will continue to damage us financially."

This article was published June 23, 2022. John Vile is a professor of political science and dean of the Honors College at Middle Tennessee State University. He is co-editor of the Encyclopedia of the First Amendment.