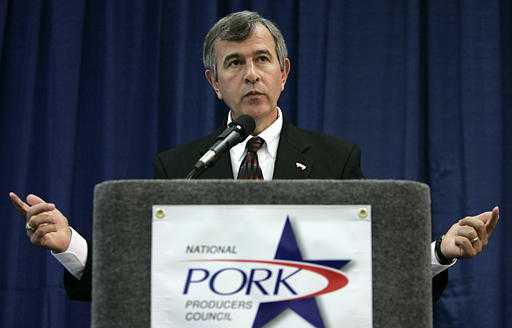 In Johanns v. Livestock Marketing Association (2005), the Supreme Court rejected a First Amendment challenge to a compelled advertising program for beef producers; the Court based its decision on the government speech doctrine. In this photo, U.S. Agriculture Secretary Mike Johanns speaks to pork producers, Friday, June 10, 2005, at the World Pork Expo in Des Moines, Iowa. (AP Photo/Charlie Neibergall, used with permission from the Associated Press)

In Johanns v. Livestock Marketing Association, 544 U.S. 550 (2005), the Supreme Court rejected a First Amendment challenge to a compelled advertising program for beef producers; the Court based its decision on the government speech doctrine.

Under the Beef Promotion and Research Act, the government imposed mandatory contributions from beef producers to fund generic advertisements for beef. Several beef producers objected, contending that they had a First Amendment right not to be compelled to contribute to such speech. They cited as authority United States v. United Foods Inc. (2001), a case in which the high court struck down a similar advertising program involving mushroom producers. The government countered that it had its own right to free speech that immunized it from a First Amendment challenge from specific beef producers.

The Supreme Court rejected the challengers’ arguments by a 6-3 vote. Writing for the majority, Justice Antonin Scalia reasoned that the government had a First Amendment right to promote its own message regarding beef. “The message set out in the beef promotions is from beginning to end the message established by the Federal Government,” he wrote. “When, as here, the government sets the overall message to be communicated, and approves every word that is disseminated, it is not precluded from relying on the government speech doctrine merely because it solicits assistance from nongovernmental sources in developing specific messages.”

Scalia appeared to offer hope for objecting beef producers when he wrote that if “individual beef advertisements were attributed” to certain beef producers, they might have a valid as-applied challenge.

In the main dissent, Justice David H. Souter, joined by Justices Anthony M. Kennedy and John Paul Stevens, wrote that “if government relies on the government speech doctrine to compel specific groups to fund speech with targeted taxes, it must make itself politically accountable by indicating that the content actually is a government message, not just the statement of one self-interested group the government is currently willing to invest with power.”