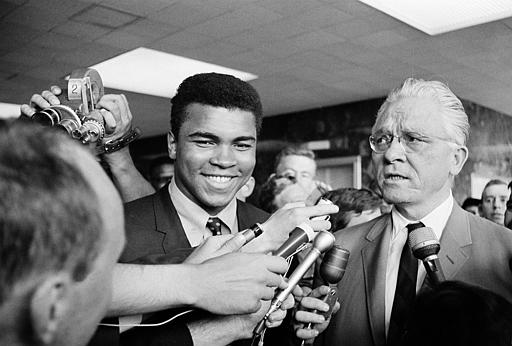 Former heavyweight champ Muhammad Ali smiles as his attorney Hayden Covington talks to newsmen after Ali was arraigned and bond was set at $5,000, May 8, 1967 in Houston. Ali pleaded "not guilty" on a charge of refusing the be drafted into the Armed Forces. They are seen after the bond was posted. (AP Photo/Ed Kolenovsky, with permission from The Associated Press.)

Although a Justice Department hearing officer, relying on an FBI investigation, had found in Clay’s favor, the Justice Department nonetheless had recommended that Clay’s plea be denied for failure to satisfy the three basic criteria for conscientious objectors.

The appeals board in turn denied Clay’s request for conscientious objector status without offering a statement of its reason. The government subsequently conceded that Clay met the second and third criteria.

"Right to conscience protected by the First Amendment"

Because the board had offered no reasons for its decision, there was no way for the Court to determine whether its rejection had been based on one of the criteria that the government now recognized him as having met. The Court thereby overturned the decision.

In a concurring opinion, Justice William O. Douglas focused more so than the other six justices on the “right to conscience protected by the First Amendment which Congress has no power to qualify or dilute.”

He argued that U.S. law should accommodate those, like Clay, who might find participation in “holy wars” acceptable but have religious convictions against all others. In another concurrence, Justice John Marshall Harlan II stressed that the appeals board may have acted on the improper idea that Clay had not asserted his conscientious objector status in a timely fashion.