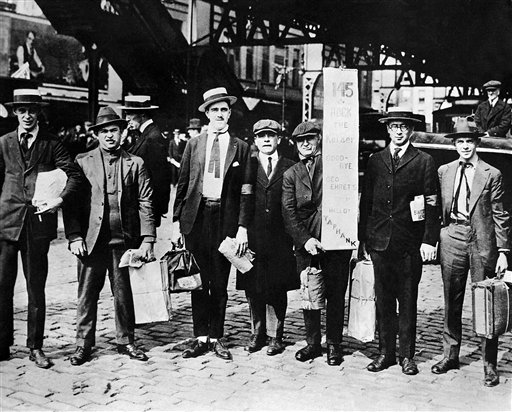 Men who were drafted into the U.S. Army in 1917 on their way to Camp Upton. Supreme Court cases during this time, including Gilbert v. Minnesota, shwoed that in time of war, criticism of national policy such as conscription was behond constitutional protection. (AP Photo, used with permission from the Associated Press.)

In Gilbert v. Minnesota, 254 U.S. 325 (1920), the Supreme Court upheld the conviction of Joseph Gilbert for criticizing U.S. participation in World War I.

Gilbert involved in the anti-war cause

Gilbert, born in England, persistently challenged the strict authority of his conservative, devout guardians and the stern discipline of school authorities. In 1883, Gilbert moved to the United States. He settled in Philadelphia, where he lived comfortably designing carpets, eventually operating his own business.

Seeking new challenges, Gilbert decided to become a lawyer. In 1900, he was admitted to the Pennsylvania bar. Dissatisfied with his law practice, he and his wife moved to Seattle, where he became involved with the Socialist Party, published a socialist newspaper, and became a widely known supporter of radical causes throughout the western United States.

In 1915, he assumed a leadership position with the Non-Partisan League of North Dakota, a farmers’ organization that advocated state ownership of banks, railroads, grain mills, warehouses, and elevators. In 1917, when the United States entered World War I, the Non-Partisan League voiced forceful opposition to its participation, especially the conscription of young men into the armed forces.

Gilbert delivered a speech in August 1917 at a public meeting of the NPL in Red Wing, Minnesota, in which he said that “if they conscripted wealth like they conscripted men the war would not last 48 hours” and “if this is a great democracy, why should we not vote on the conscription of men?” He went on to state “we were stampeded into this war by newspaper rot to pull England’s chestnuts out of the fire!”

Gilbert was arrested for violating the Minnesota sedition statute that made it illegal “to speak, or teach, by word of mouth opposition to the war, or to advocate against enlistment.” He was tried, convicted, and sentenced to one year in the county jail and ordered to pay a $500 fine, plus court costs.

Gilbert appealed to the Minnesota Supreme Court. He challenged whether Minnesota had the power to pass such a sedition law, contending that the statute was a violation of the U.S. Constitution in that every allegation in the indictment was under powers granted to Congress, not the states. Furthermore, he alleged that the statute in question was obnoxious to the “inherent right of free speech in criticizing the policies of the United States Government.”

Majority said free speech protection is applicable to the states

For the majority, Justice Joseph McKenna wrote that assuming that the First Amendment’s free speech protection is applicable to the states, the states nevertheless have the right to make the national purpose their own in exerting police powers to prevent persons from obstructing national policies and to preserve the peace of the state.

McKenna held that Gilbert’s speech had the purpose of assaulting the statute and justifying anarchy to benefit the enemies of the nation. Gilbert’s speech advocated a policy meant to counteract the law, which the speaker had no right to do.

Chief Justice Edward D. White dissented, holding that the powers in the Minnesota statute were wholly those of Congress, not of the states. Justice Louis D. Brandeis also dissented, arguing that the Minnesota law outlawed beliefs, not just actions, and that it would invade the private security of the family if it prevented a father from advising his son not to join the army for reasons of conscience or religion. He added that the statute deprived persons of rights guaranteed by the Constitution.

In citing a long list of cases that showed the use of due process to protect property rights, he observed sarcastically, “I cannot believe that the liberty guaranteed by the Fourteenth Amendment includes only liberty to acquire and to enjoy property.”

However, Brandeis did echo McKenna’s statement in the majority opinion that advocated the inclusion of free speech — and thus its protection by the states — within the meaning of the word liberty regarding the Fourteenth Amendment’s due process clause.

This approach would not be confirmed by the full court until Gitlow v. New York (1925). The decision in Gilbert as well as others from this era — including Schenck v. United States (1919) and Abrams v. United States (1919) — remain a clear sign that in a time of war, any serious criticism of national policy would be beyond the protection of the Constitution.