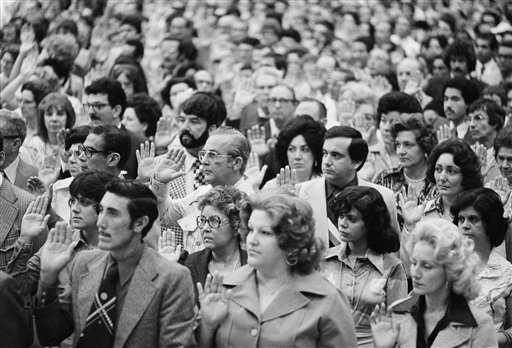 Part of a group 17,1941 persons take the oath of allegiance to the U.S. and become citizens in one of the largest naturalization ceremonies in history on Sunday, July 5, 1976, in Miami Beach, Florida. Thirty years earlier, the Supreme Court decided in Girouard v. United States that applicants do not have to swear they will bear arms in defense of the United States if they have religious convictions to bearing arms. (AP Photo/BH, used with permission from the Associated Press.)

In Girouard v. United States, 328 U.S. 61 (1946), the Supreme Court held that applicants for citizenship may not be required to swear under oath that they will bear arms in defense of the United States if they have religious objections to bearing arms in the military.

Girouard refused to swear to bear arms due to religious convictions

James Girouard was a native of Canada and a Seventh-day Adventist. When he applied for U.S. citizenship, he refused to state that he would be willing to take up arms in defense of the country because his religious beliefs prevented him from bearing arms. He further explained, however, that he would be willing to work in the military in a noncombat role. Girouard was denied citizenship.

In the opinion for the Court, Justice William O. Douglas explained that constitutional principles prevented Congress from requiring an applicant for citizenship to “forsake his religious scruples to become a citizen.” Finding inspiration in the First Amendment’s religion clauses, the religious test clause of Article 6, and equal protection values, Douglas disavowed prior cases that had held that Congress could require oaths to take up arms regardless of applicants’ religious motivations. Douglas wrote, “Devotion to one’s country can be as real and as enduring among non-combatants as among combatants.”

Chief Justice Harlan Fiske Stone dissented, arguing that the Court’s prior decisions aligned with congressional intent to require oaths regardless of religious motivations. “It is not the function of this Court,” Stone wrote, “to disregard the will of Congress in the exercise of its constitutional power.”