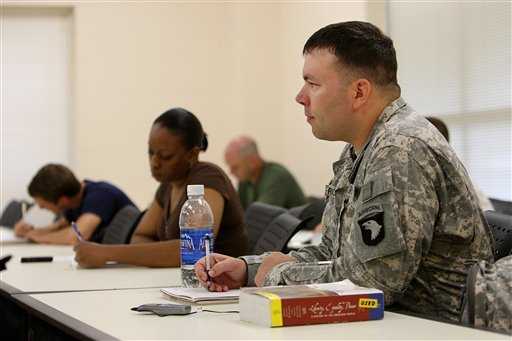 In Johnson v. Robison, 415 U.S. 361 (1974), the Supreme Court ruled that a federal law making veterans’ education benefits available for individuals who had served in the military, but not for conscientious objectors who had performed alternate service, did not violate either the equal protection or free exercise clauses. In this Thursday June 4, 2009 photo, SPC Thomas Richmond takes notes during an American History class at the new Austin Peay University building at the Fort Campbell Army Base in Fort Campbell, Ky. Many universities are looking for ways to ease the transition for veterans from combat to the classroom. Colleges across the country are offering veterans-only classes, adding counselors and streamlining the application and financial aid process. (AP Photo/Josh Anderson, used with permission from the Associated Press)

In Johnson v. Robison, 415 U.S. 361 (1974), the Supreme Court ruled that a federal law making veterans’ education benefits available for individuals who had served in the military, but not for conscientious objectors who had performed alternate service, did not violate either the equal protection or free exercise clauses.

In the 8-1 majority decision, Justice William J. Brennan Jr. wrote that the law at issue was intended to bar court review of administrative determinations of individual eligibility rather than to preclude review of constitutional issues. Then, measuring the law at issue for its reasonableness and its relationship to the object of the legislation, he found that the degree of disruption veterans suffered was far greater and “qualitatively different” than that of conscientious objectors who performed alternate service. Brennan also ascertained a rational relationship between the legislation and its goals. Congress had not adopted the law to penalize beliefs, and the withholding of educational benefits “involves only an incidental burden upon appellee’s free exercise of religion.” As Brennan saw it, conscientious objectors had been excluded “not because of any legislative design to interfere with their free exercise of religion, but because to do so would not rationally promote the Act’s purposes.”

In the sole dissenting opinion, Justice William O. Douglas referenced a number of other free-exercise decisions, including Sherbert v. Verner (1963) and Wisconsin v. Yoder (1972), that he thought called for a different verdict. He wrote that benefits should be just as available to conscientious objectors who had engaged in alternate service as it was to individuals who held desk jobs in the military. As he saw it, “Government . . . may not place a penalty on anyone for asserting his religious scruples. That is the nub of the present case.”