By Scott Johnson
Related cases in Copyright and Free Expression 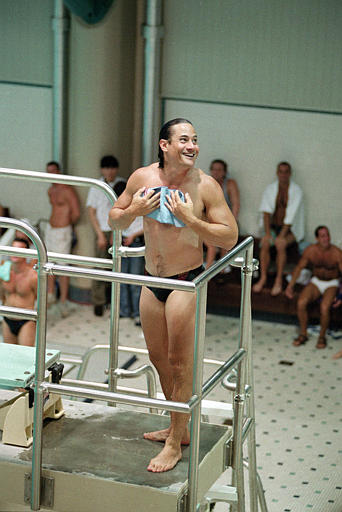 The Gay Games was founded in 1982 and began to advertise its upcoming event as the Gay Olympic Games. The U.S. Olympics Committee, which had been granted by Congress exclusive rights to the word "Olympics," got an injunction against the group. The Supreme Court rejected arguments that forcing the group to stop using "Olympics" was a violation of First Amendment rights. In this 1994 photo, Olympic gold medalist Greg Louganis smiles from the platform of the 3-meter springboard during the diving competition of the Gay Games IV in New York City. (AP Photo/Chrystyna Czajkowsky, used with permission from the Associated Press)

The Court voted 5-4 that Congress had authorized the use of the word Olympics to the U.S. Olympic Committee (USOC) with the passage of the Amateur Sports Act of 1978.

The Court also held that Congress had not infringed upon the First Amendment rights of the SFAA by granting exclusive rights to the USOC for use of the word Olympics.

The SFAA had argued that it was engaged in political speech protected by the First Amendment.

Justice Lewis F. Powell Jr. wrote the opinion for the majority and noted that the language and legislative history of the Amateur Sports Act of 1978 demonstrated that Congress had given the USOC exclusive rights to the word Olympics.

Justice Sandra Day O’Connor wrote an opinion concurring in part and dissenting in part. O’Connor argued that the Amateur Sports Act did not violate the free speech rights of the SFAA, but she did disagree with the majority’s contention that USOC was not a government actor subject to the limitations of the Fifth Amendment rights.

Justice William J. Brennan Jr. authored a dissenting opinion in which he asserted that the SFAA did have its First Amendment rights violated by the congressional legislation and also that Congress bestowed important governmental functions onto the USOC, which made it a government actor capable of viewpoint discrimination against the SFAA.

This article was originally published in 2009. Dr. Scott P. Johnson has been a professor of Political Science, Coordinator of Law & Society, and Pre-Law advisor at Frostburg State University since 1999. He has authored articles in law journals and law reviews regarding the Supreme Court's unanimous decisions, the presidential pardon power, and Justice Souter and the First Amendment. He also published an encyclopedia entitled Trials of the Century (ABC-CLIO, 2010) and a book entitled The Faces of Lee Harvey Oswald (Rowman & Littlefield, 2013).