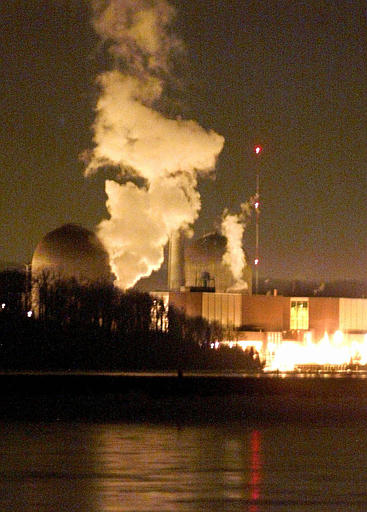 Con Edison, one of the largest investor-owned energy companies in the United States, in 1979 won a case at the Supreme Court over whether it could use ratepayer money to insert pro-nuclear power literature in bills. The Court ruled that the utility, which supplies electricity to New York and is regulated by the New York Public Service Commission, had a right as a corporation to speak on matters of public importance. The case was one in a series that expanded free speech rights of corporations. In this photo dated Feb. 15, 2000, steam rise from the Con Edison Indian Point 2 nuclear power plant in Buchanan, N.Y. (AP Photo, courtesy of The Associated Press.)

It is one of several decisions issued by the Court since the late 1970s that have recognized and expanded the First Amendment free speech rights of corporations.

In January 1976, Con Edison (Con Ed) included in its customers’ billing statements a flyer expressing its support for nuclear power. In March, Con Ed refused to allow an opponent of its view to include a rebuttal along with the next billing statements.

The opponent requested that the New York Public Service Commission (PSC) require Con Ed to include the rebuttal. The PSC refused the request but ordered Con Ed to cease using such inserts to express its views on controversial issues of public policy because its customers were a captive audience and should not be subjected to such views.

Writing for a 7-2 majority, Justice Lewis F. Powell Jr. asserted that the utility had an inherent right to speak on critical public matters despite being a government-regulated monopoly. He observed that the New York Court of Appeals’ concern about the infringement of a customer’s right to privacy could be cured “by transferring the bill insert from the envelope to wastebasket.”

In a concurrence, Justice Thurgood Marshall noted that the ruling did not address the question of excluding the cost of the bill inserts from the rate base customers had to pay, while Justice John Paul Stevens’s concurrence focused on the argument that opposition to the company’s point of view was an inadequate ground for censoring it.

Justice Harry A. Blackmun, joined by Justice William H. Rehnquist, found that the PSC had a legitimate concern in noting that the costs of the inserts were in fact included in the rate base and thus fully subject to the commission’s regulation.

By including the insert, the utility made use of property “for which the public is compelled to pay, for the utility’s sole benefit.” He reasoned that the inserts were a cost that shareholders should absorb. He pointed out that the PSC, as an arm of the state, could likely achieve its goals using a different approach to regulating the issue.