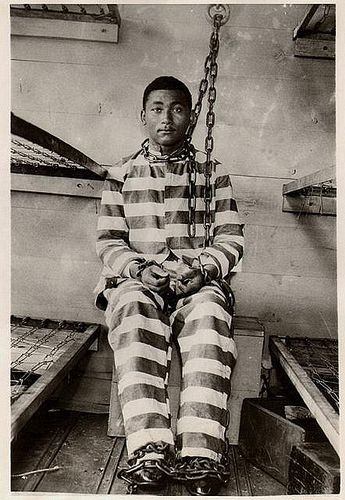 Angelo Herndon, pictured here, was charged with attempts to incite an insurrection. Herndon was convicted for possessing Communist literature. The Supreme Court later overturned his conviction as violating the First Amendmnet. Herndon had to spend 26 months in prison chain gang before being released on bail while his case was being appealed. (Photo via public domain)

In Herndon v. Lowry, 301 U.S. 242 (1937), the Supreme Court struck down a Georgia Supreme Court decision that had upheld a conviction under a state criminal syndicalism statute penalizing attempts to incite insurrection or inducing others to do so. The Court held that the state had violated First Amendment rights of free speech and assembly.

Angelo Herndon was an African American member of the Communist Party who had moved from Kentucky to Atlanta as an organizer. Although he was found with communist publications in his possession, there was no evidence that he had distributed materials calling for the violent overthrow of the government. Rather than applying the clear and present danger test that the Court had articulated in Schenck v. United States (1919) and related cases, the Georgia courts had relied on Gitlow v. New York (1925) to show that Herndon’s materials had a “dangerous tendency,” which the state could prevent.

Court struck down conviction for violating the First Amendment

Justice Owen J. Roberts, writing for the 5-4 majority, argued that “The power of a state to abridge freedom of speech and of assembly is the exception rather than the rule and the penalizing even of utterances of a defined character must find its justification in a reasonable apprehension of danger to organized government.” In the case at hand, the Georgia court had construed the statute in such a “vague and indefinite” way as to violate the First Amendment. The state appeared to be penalizing Herndon in part because he was spreading literature having to do with unemployment and emergency relief. Roberts noted that the court further failed to distinguish advocacy of violence “in the distant future” from those that were more proximate.

In his dissenting opinion, Justice Willis Van Devanter argued that the state had provided “a reasonably definite and ascertainable standard by which to determine the guilt or innocence of the accused.” He pointed to literature in Herndon’s possession indicating that the communists wanted to bring about revolution and stir up racial hatred. He noted that First Amendment guarantees of speech and assembly did not shield or protect “acts of intentional incitement to forcible resistance to the lawful authority of a State.” He thought the lower court’s decisions could be interpreted only to apply to the proximate inducement of violence.

Herndon and De Jonge v. Oregon (1937) are the first decisions in which the Supreme Court applied the freedom of assembly provisions of the First Amendment to the states via the Fourteenth Amendment. Brandenburg v. Ohio (1969) eventually rejected other state laws that attempted to punish individuals for speech that did not result in the threat of “imminent lawless action.”