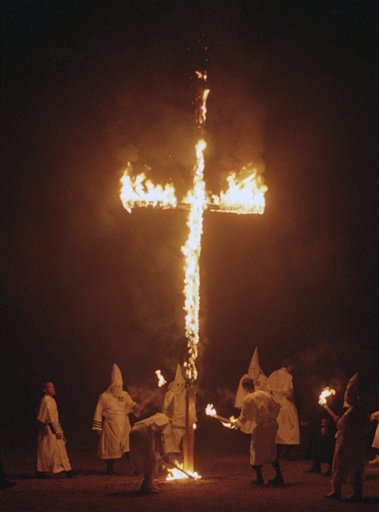 Virginia v. Black (2003) upheld a statute making it illegal to burn a cross in public to intimidate others. Cross burning was considered a true threat unprotected by the First Amendment. In this phoot, members of the Ku Klux Klan circle a burning cross in a field in Oak Grove, Michigan, June 24, 1995 while chanting "white power." About thirty Klan supporters and a few members of the Michigan State Police watched the cross go up in flames. Earlier in the day the Klan held a rally in front of the Hillsdale, Michigan County Courthouse. (AP Photo/Jeff Kowalsky, used with permission from the Associated Press)

The case involved two cross burnings — one at a Ku Klux Klan rally and the other in front of an African American’s home. One of the defendants, Klan leader Barry Black, insisted on a trial, after which the judge instructed the jury that the burning of a cross by itself was sufficient to infer the intent to intimidate. Black was then convicted. On appeal, the Supreme Court of Virginia held the statute was unconstitutional.

The Supreme Court reversed. Justice Sandra Day O’Connor’s opinion for the plurality began with a discussion of the history of cross burning. She concluded that some, but not all, cross burnings were intimidatory. Speaking for six justices, she held that even though cross burning was at times expressive, Virginia could ban cross burning because it represented a “true threat.” In her opinion, O’Connor relied on Watts v. United States (1969), which held that true threats are not a form of protected expression under the First Amendment.

To distinguish this case from R.A.V. v. St. Paul (1992), which held that a local ordinance that banned cross burnings inspiring hatred based on “race, color, creed, religion or gender” amounted to constitutionally impermissible content discrimination, Justice O’Connor held that cross burning was “a particularly virulent form of discrimination.” Therefore, it fell into an exception established under R.A.V. that let states ban extreme forms of a given type of proscribable speech without banning other, less severe forms.

Justice John Paul Stevens concurred in a brief opinion reminding the court that he had dissented in R.A.V.

Dissenting justices thought statute was content discrimination against the Klan

Three justices, led by Justice David H. Souter, took a libertarian position. They agreed with Justice O’Connor that instruction allowing the jury to infer intent to intimidate from the public burning of a cross was unconstitutional, but they would have rejected the entire statute as unconstitutional, largely because they viewed the law as content discrimination directed at the Klan.

Justice Antonin Scalia, in a separate dissent joined by Justice Clarence Thomas, faulted O’Connor for invalidating the jury inference on the basis of a single errant jury charge. Justice Thomas, writing for himself, made the further argument that because cross burning by its very nature is intimidatory, the jury provision raised no constitutional problems.

Not only does Black mark a departure from R.A.V., but its reliance on the Watts “true threats” language suggests a potential retrenchment of the Court’s broad protection of subversive speech, a development that bears watching in an era overshadowed by the War on Terror.