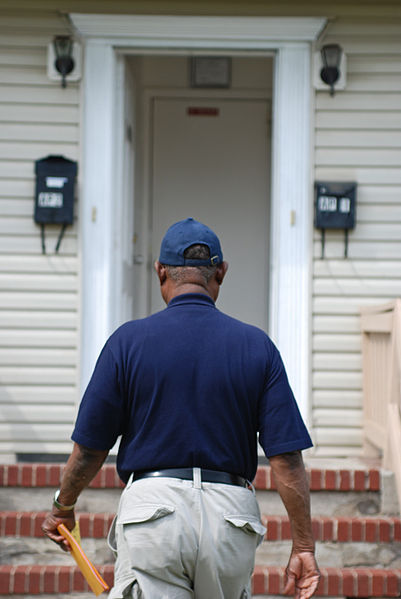 The Supreme Court, in Breard v. Alexandria, 341 U.S. 622 (1951), upheld a local ordinance prohibiting unsolicited door-to-door sales, ruling that it did not violate the First Amendment, the 14th Amendment, or the commerce clause. (Image of FEMA worker going door-to-door via Wikimedia Commons, public domain)

The Supreme Court, in Breard v. Alexandria, 341 U.S. 622 (1951), upheld a local ordinance prohibiting unsolicited door-to-door sales, ruling that it did not violate the First Amendment, the 14th Amendment, or the commerce clause.

Jack H. Breard, a regional magazine salesman, challenged his arrest and conviction in Alexandria, Louisiana, under a local “Green River ordinance.” His company argued that the law violated the commerce clause by restricting interstate commerce and that magazine sales were protected by the First Amendment’s freedoms of speech and the press.

Court said government can restrict business in the public interest

Writing for the six-justice majority, Justice Stanley F. Reed found that the ordinance did not interfere unduly with “the right to engage in one of the common occupations of life,” because the regulation left open other means of commercial soliciting, such as radio advertisements or mass mailings.

Moreover, while states cannot discriminate against interstate commerce, in the absence of federal legislation specifying otherwise, they are not barred from regulation indirectly affecting such commerce. Further, governments have the right to restrict even legitimate businesses in the public interest to protect people from “practices deemed subversive of privacy and of quiet.”

Reed also dismissed arguments based on First Amendment freedoms of speech and press because the laws at issue were “commercial” in nature. He thus distinguished this case from Martin v. City of Struthers (1943), which had invalidated a more general ban on door-to-door solicitations, on the basis that Martin’s ban was not limited to commercial activities.

Reed concluded that it would be “a misuse of the great guarantees of free speech and free press to use those guarantees to force a community to admit the solicitors of publications to the home premises of its residents.”

Justice Hugo L. Black’s dissent, also joined by Douglas, focused on First Amendment issues and on the tension between this case and prior decisions like Martin, Jones v. City of Opelika (1943) and Murdock v. Pennsylvania (1943), which had in part involved noncommercial transactions. Black supported the doctrine that First Amendment rights have a “preferred position” within the Constitution. He tied the “liberty to publish and circulate” to the economic right to solicit paying subscribers, who are free to reject such solicitations.

Increasingly expansive Supreme Court decisions applying First Amendment protection to commercial speech make it difficult to know whether the Court would still regard this decision as good law. It is clear, however, that today’s Court would devote more attention to the impact of such laws on First Amendment rights than to the property-related issues that dominated the majority decision in this case.