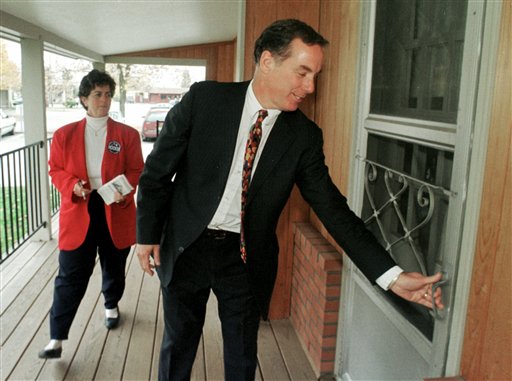 In Hynes v. Mayor of Oradell (1976), the Supreme Court invalidated ordinances requiring advanced notices to police departments of door-to-door canvassing and solicitations because of vagueness, ruling that they violated First and Fourteenth Amendment rights of speech and assembly. In this photo, state Sen. Cheryl Hooker, left, campaigns door-to-door with Gov. Howard Dean in Vermont, in this 1998 photo. (AP Photo/Toby Talbot, used with permission from the Associated Press)

In Hynes v. Mayor of Oradell, 425 U.S. 610 (1976), the Supreme Court invalidated ordinances requiring advanced notices to police departments of door-to-door canvassing and solicitations because of vagueness, ruling that they violated First and Fourteenth Amendment rights of speech and assembly.

The Borough of Oradell, New Jersey, adopted an ordinance that required individuals going house-to-house for civic organizations, charities, or political campaigns to notify the police department in writing for identification purposes. Hynes, a New Jersey state assemblyman whose district included Oradell, was joined by three other registered voters of the borough in challenging the law.

Chief Justice Warren E. Burger wrote the 7-1 majority opinion (Justice John Paul Stevens did not participate), with which four other justices agreed, that a city could regulate door-to-door solicitations to protect citizens by a narrowly drawn ordinance, but in which seven justices thought the regulation at issue violated First and Fourteenth Amendment rights of speech and assembly by being void for vagueness.

Burger’s review of precedents led him to acknowledge a city’s interest in protecting its citizens from annoyance, undue intrusion, and crime, but he thought that it was especially important that laws dealing with speech be clear. In this case, he did not think the borough had been clear as to which groups it covered or what canvassers had to include in the notification they sent to the police.

In concurrence, Justice William J. Brennan Jr., joined by Justice Thurgood Marshall, indicated that he was not as certain as Burger whether the ordinance would have been constitutional even had it been clearer. He was especially concerned about the threat that the ordinance might pose to anonymous speech.

In a dissenting opinion, Justice William H. Rehnquist questioned whether the appellants had standing to raise all the issues that the Court had resolved. He pointed out that the ordinance did not require a permit, and he denied that it was vague.

The line between permissible and impermissible regulations of door-to-door solicitations remains vague, with the Court most likely to strike down the regulation of religious and political and other noncommercial speech.