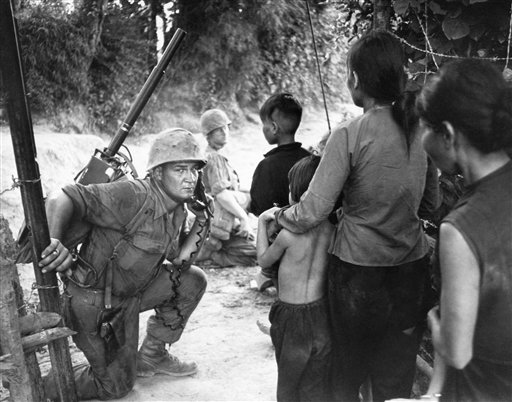 The Vietnam War lead to many protests in the United States. When one protester wore a U.S. military uniform in a street skit that negatively portrayed U.S. soldiers in Vietnam, he was convicted under a statute that prohibited wearing a uniform in a theatrical production that discredited the armed forces. The Supreme Court struck down the law as an unconstitutional, viewpoint-based limit on free speech in Schacht v. United States. (In this Vietnam War photo, a Vietnamese woman watches U.S. Marines while they check a bunker in Nam Yen, 10 miles northwest of Da Nang, Vietnam on Tuesday, May 26, 1965 during an operation. The Marines found 12 Viet Cong suspects on both sides of the Ca Be River. (AP Photo/JTW, used with permission from The Associated Press.)

In Schacht v. United States, 398 U.S. 58 (1970), the Supreme Court unanimously struck down a conviction for the unauthorized wearing of a military uniform at an outdoor performance, stating that the performance was within the definition of “theatrical production.”

The case involved a classic example of whether an individual had a First Amendment right to engage in a form of expressive conduct, in this case the wearing of certain clothing.

The petitioner, Daniel Jay Schacht, was one of several people who had worn uniforms in a skit performed on the street during a Vietnam War antiwar demonstration.

Two of the actors were dressed in U.S. military uniforms, and a third person was outfitted in typical Viet Cong apparel. The first two men would shout “Be an able American!” then shoot the Viet Cong with water pistols containing a red liquid that, when it struck the victim, created the impression that he was bleeding.

Once the victim fell down, the other two would walk up to him and exclaim “My God, this is a pregnant woman.” The script was prepared in advance and reenacted several times during the morning of the demonstration.

The federal statute, under which Schacht was convicted, made it an offense to wear a military uniform without authority.

However, it permitted an actor portraying a member of one of the armed forces in a “theatrical production” to “wear the uniform of that armed force if the portrayal does not tend to discredit that armed force.”

The Supreme Court made it clear that the prohibition of wearing a military uniform without authority is, standing alone, a valid statute on its face, and that a total prohibition would be valid.

Because law discriminated based on viewpoint, it was unconsitutional, Supreme Court rules

However, a prohibition sensitive to the viewpoint of speech could not stand. The Court held the statute unconstitutional because it provided that an actor “was free to participate in any skit at the demonstration that praised the Army, but . . . could be convicted of a federal offense if his portrayal attacked the Army instead of praising it.”

The clause, “which leaves Americans free to praise the war in Vietnam but can send persons like Schacht to prison for opposing it, cannot survive in a country which has the First Amendment,” the Court concluded.

The decision is important for the broad understanding of “theatrical production.”

While the government argued that the term applied only to performances in a setting equivalent to a playhouse or theater, where the observers would know they are watching a make-believe performance, the Court’s view was that amateurish outdoor performances are within the definition of “theatrical production.”

In a concurring opinion, three of the justices stressed that the “critical question in deciding what is to count as a ‘theatrical production’ ought to be whether or not . . . an ordinary observer would have thought he was seeing a fictitious portrayal rather than a piece of reality.”

This article was originally published in 2009. Jurij Toplak, Ph.D., is a Professor of Law at the University of Maribor, Slovenia.