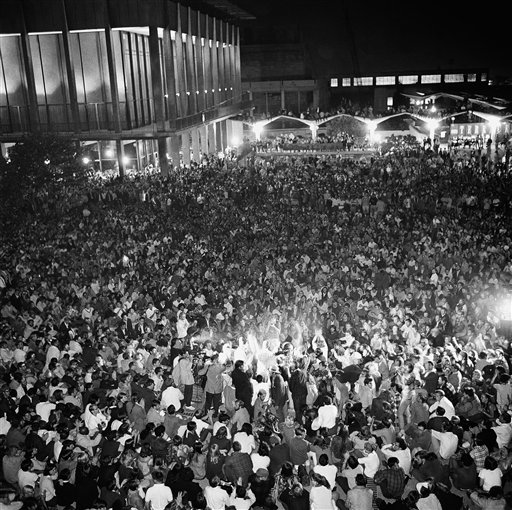 Young people were protesting against the draft and the Vietnam War in the late 1960s and into the 1970s. It was in this environment that Paul Robert Cohen wore a jacket bearing the words "Fuck the Draft" into a Los Angeles courthouse and was charged with violating the state's breach-of-the-peace law. The Supreme Court reversed his conviction. (In this October 1967 AP photo, more than 5,000 anti-draft demonstrators jam a plaza at University of California at Berkeley, listening to speeches and watching draft card burnings. Reprinted with permission from The Associated Press.)

In Cohen v. California, 403 U.S. 15 (1971), the Supreme Court established that the government generally cannot criminalize the display of profane words in public places.

The controversy in this case began in April 1968, when Paul Robert Cohen wore a jacket bearing the words “Fuck the Draft” into a Los Angeles courthouse.

He was arrested and charged with violating a state breach-of-the-peace law prohibiting disturbing of the peace by “offensive conduct.”

A Los Angeles court convicted Cohen and sentenced him to 30 days in jail. A California court of appeals affirmed his conviction, finding that it was “certainly reasonably foreseeable” that his conduct in wearing his jacket could cause a violent reaction. The Supreme Court of California declined to review the case by a 4-3 vote. Cohen appealed to the U.S. Supreme Court, which reversed his conviction in a 5-4 vote.

In the opinion for the Court, Justice John Marshall Harlan II began by observing that the “case may seem at first blush too inconsequential to find its way into our books, but the issue it presents is of no small constitutional significance.”

“No individual actually or likely to be present could reasonably have regarded the words on appellant’s jacket as a direct personal insult,” he wrote.

Rejecting the state’s argument that the conviction was justified as a way to protect the privacy interests of unwilling viewers, including women and children, Harlan responded that they and others upset by Cohen’s jacket “could effectively avoid further bombardment of their sensibilities by averting their eyes.”

'One man's vulgarity is another's lyric'

Harlan also rejected the idea that the state could prohibit the display of Cohen’s jacket as the guardian of public morality.

In oft-cited language, he noted, “[O]ne man’s vulgarity is another’s lyric” and “because government officials cannot make principled distinctions in this area that the Constitution leaves matters of taste and style so largely to the individual.”

He also warned that the “government might soon seize upon the censorship of particular words as a convenient guise for banning the expression of unpopular views.”

Writing for the four dissenters, Justice Harry A. Blackmun called “Cohen’s absurd and immature antic . . . mainly conduct and little speech.” He reasoned that the language on the jacket fell within the fighting words exception.