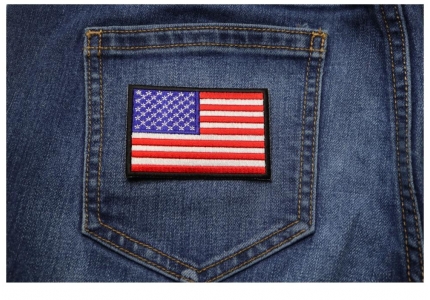 A Massachusetts man who wore a flag sewn on the seat of his blue jeans was convicted under a law that criminalized contemptuous treatment of the U.S. flag. But the Supreme Court in 1974 overturned the law as being too vague and overly broad, violating First Amendment rights of free speech.

In Smith v. Goguen, 415 U.S. 566 (1974), the Supreme Court ruled that a Massachusetts law criminalizing contemptuous treatment of the U.S. flag was unconstitutionally vague because it failed to provide sufficient standards to guide law enforcement.

Man arrested for wearing flag on back of jeans

Police in Leominster, Massachusetts, arrested Valarie Goguen under the statute in question after noticing that he had a flag sewn on the seat of his blue jeans. A jury in Worcester County convicted Goguen, and the state trial court judge imposed a sentence of six months imprisonment.

The Massachusetts Supreme Judicial Court affirmed the conviction. Goguen then filed a writ of habeas corpus in federal court, asserting the unconstitutionality of his confinement and state court conviction.

A federal district court ordered his release, determining the law to be too vague. The First Circuit Court of Appeals affirmed, finding the statute unconstitutionally vague and overbroad.

On appeal, the Supreme Court ruled 6-3 in favor of Goguen.

Five members of the Court, in a majority opinion authored by Justice Lewis F. Powell Jr., determined the case on vagueness grounds. Powell noted that contemporary attitudes toward the flag had changed dramatically and that “it could hardly be the purpose of the Massachusetts Legislature to make criminal every informal use of the flag.”

Powell focused on the broad, undefined word contemptuously, noting that it provided no real standard for law enforcement.

Justice Byron R. White concurred, finding that the case should be decided on the ground of overbreadth. White reasoned that the legislature’s reference to “contemptuous” action meant that it was punishing Goguen “for communicating ideas about the flag unacceptable to the controlling majority in the legislature.”

Blackmun’s short opinion argued that the Massachusetts high court properly had clarified that Goguen had been punished not for any possible communicative conduct, but for harming the physical integrity of the flag. Rehnquist authored a much longer dissent, quoting James Madison, Oliver Wendell Holmes, Ralph Waldo Emerson, and others. He concluded that Goguen “was simply prohibited from impairing the physical integrity of a unique national symbol.”