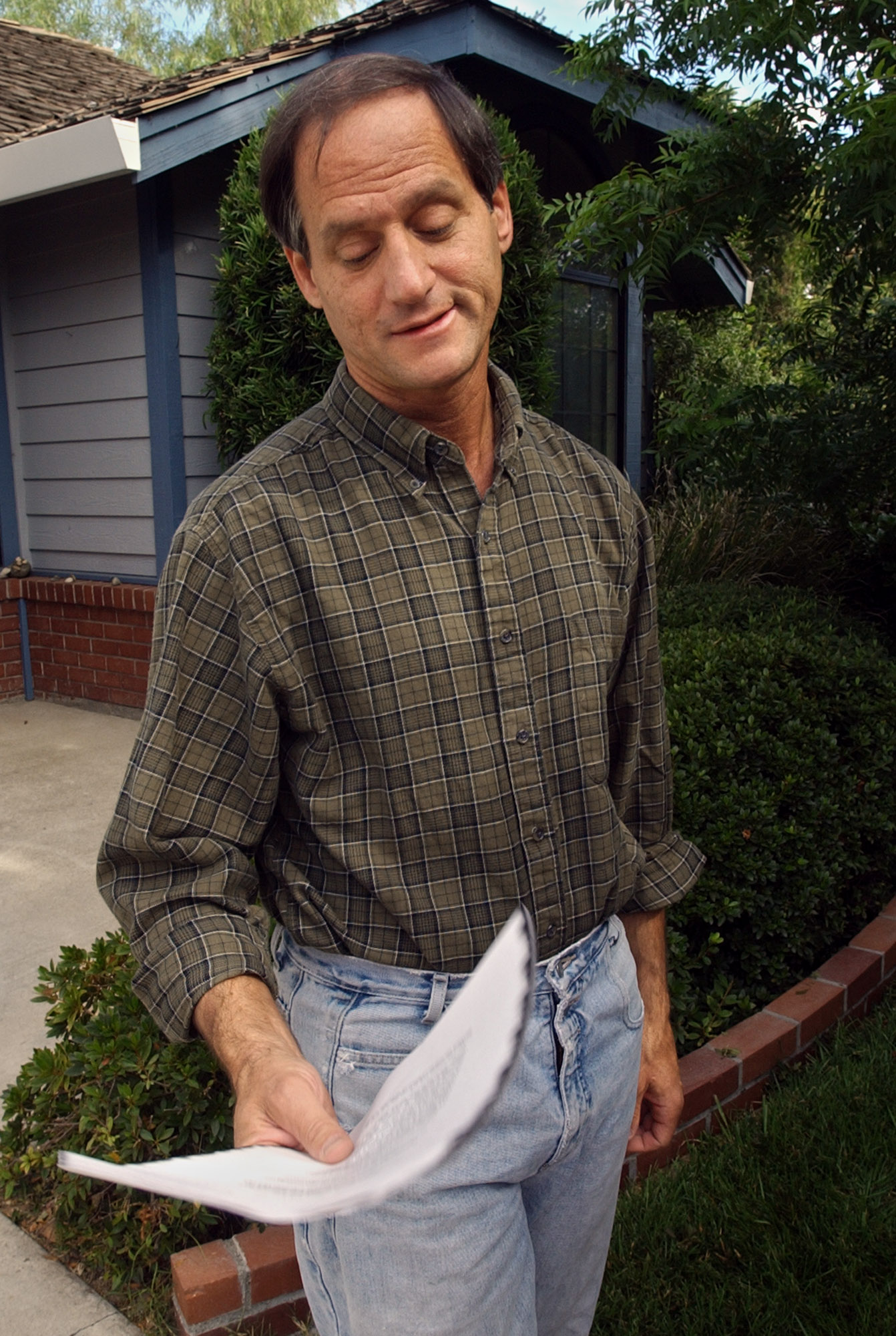 Michael Newdow looks down at the fax copy of the Supreme Court's ruling preserving the phrase "one nation under God" in the Pledge of Allegiance outside his California home in 2004. The court said Newdow could not sue to ban the pledge from his daughter's school and others because he did not have legal authority to speak for her. (AP Photo/Rich Pedroncelli, used with permission from The Associated Press.)

In Elk Grove Unified School District v. Newdow, 542 U.S. 1 (2004), the Supreme Court, by holding that Michael Newdow lacked legal standing to litigate as his daughter’s “next friend,” avoided addressing whether the words “under God” in the Pledge of Allegiance violated the First Amendment’s establishment clause.

The Court, minus Justice Antonin Scalia, who recused himself for having criticized the decision of the 9th U.S. Circuit Court of Appeals, decided the case in an 8-0 vote, with three concurrences.

In March 2000, Newdow sued the Elk Grove, California, school district, contending that because the Pledge of Allegiance referred to the United States as “one nation, under God,” its daily recitation violated the establishment clause.

Allowing students to opt out of the pledge, as required by West Virginia State Board of Education v. Barnette (1943), he argued, forced his child “to watch and listen as her state-employed teacher . . . led her classmates in a ritual proclaiming that there is a God.”

The 9th Circuit, reversing the district court’s dismissal of the complaint, held that Newdow possessed legal standing to challenge a practice that interfered with his right to direct his daughter’s religious education. In a separate 2-1 decision, the 9th Circuit held that the pledge violated the First Amendment’s establishment clause.

Writing for the Supreme Court, Justice John Paul Stevens, joined by Justices Anthony M. Kennedy, David H. Souter, Ruth Bader Ginsburg, and Stephen G. Breyer, stated that since the state courts had not yet clarified Newdow’s standing and custodial status, “the prudent course is for the federal court to stay its hand rather than to reach out to resolve a weighty question of federal constitutional law.”

Chief Justice William H. Rehnquist and Justices Sandra Day O’Connor and Clarence Thomas concurred with the outcome but dissented in part, saying that in their view Newdow possessed standing.

Phrase does not transform recitation into religious exercise

Both Rehnquist and Thomas asserted that the phrase “under God,” added by Congress in 1954, did not transform recitation of the pledge into a religious exercise or create an establishment of religion.

In a separate concurrence, O’Connor held that the phrase “under God” represented “a tolerable attempt to acknowledge religion and to invoke its solemnizing power without favoring any individual religious sect or belief system.”

Newdow subsequently filed new lawsuits in the district court in Sacramento against five California school districts, the state, and the federal government in his continued efforts to remove the words “one nation, under God” from the pledge. Newdow has promised to file other lawsuits, starting with Texas and Florida.

Jon L. Brudvig was Director of the Theodore Roosevelt Honors Leadership Program at Dickinson State University in North Dakota when this article was published in 2009.