Rosenberger v. Rectors and Visitors of the University of Virginia (1995) 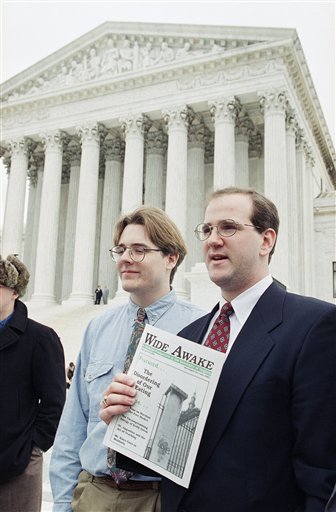 Ronald Rosenberger, right, co-founder of “Wide Awake,” holds a copy of the magazine outside the Supreme Court in 1995 after the court heard arguments on the University of Virginia’s refusal to subsidize the Christian magazine. The court ruled in Rosenberger v. Rectors and Visitors of the University of Virginia that the university cannot engage in viewpoint discrimination when considering funding for publications. (AP Photo/Denis Paquin, used with permission from the Associated Press)

According to the Supreme Court decision in Rosenberger v. Rectors and Visitors of the University of Virginia, 515 U.S. 819 (1995), a public university that funds student-run publications cannot engage in viewpoint discrimination by denying funding to select publications based on the particular views expressed in those publications.

The Court’s decision examined a clash between the First Amendment free speech principle of eschewing viewpoint discrimination and the establishment clause principle of limiting state aid to religion.

Religious activities could not get funds from university

The University of Virginia established the Student Activities Fund (SAF), through a mandatory student fee, to pay for extracurricular activities by students that supported the “educational purpose of the University.” Student organizations could apply for SAF certification and be eligible for reimbursement of expenses related to an educational purpose, which could include the expression or support of policy or ideological preferences.

Ronald Rosenberger, a full-time student, established Wide Awake Productions (WAP), a magazine published for the discussion of public issues from “Christian viewpoints,” and received SAF certification to apply for reimbursement of legitimate expenses. After publication, Rosenberger applied for reimbursement of printing costs and was denied by SAF on grounds that WAP was considered a “religious activity.” Rosenberger filed suit in federal court maintaining that the university’s policy constituted “viewpoint discrimination” and violated the First Amendment.

Arguing before the Supreme Court, the University of Virginia attempted to justify its denial of funding to WAP on the basis that it, an agency of the state, was funding the student forum and this allowed it to discriminate.

The Court, however, reversed the lower court in a 5-4 ruling and held that the university had violated Rosenberger’s constitutional rights through a policy of viewpoint discrimination.

Kennedy began with the assertion that it is axiomatic that “government may not regulate speech based on its content,” unless it is in the context of a “limited forum” for the discussion of specifically named topics. In such instances, “content discrimination may be permissible if it preserves the purposes of that limited forum.”

When, however, the government attempts to regulate “particular views taken by speakers on a subject, the violation of the First Amendment is all the more blatant.” Kennedy explained that viewpoint discrimination was an especially “egregious” form of content discrimination.

Relying on the Court’s decision in Lamb’s Chapel v. Center Moriches Union Free School District (1993), Kennedy conceded that when the government decides to fund “private speakers to transmit specific information pertaining to its own program,” it may discriminate based on content. But the SAF program is designed “to encourage a diversity of views from private speakers” through reimbursement of certain costs incurred by student organizations. Because the university grants financial benefits to certified student organizations, it must provide those benefits using a procedure that is viewpoint neutral: “WAP did not seek a subsidy because of its Christian editorial viewpoint; it sought funding as a student journal, which it is.”

Although the university did not emphasize its concern over a possible violation of the establishment clause as a rationale for not funding WAP, Kennedy dismissed the possibility of such a concern.

After reviewing a series of cases in this area, the Court concluded “that a significant factor in upholding governmental programs in the face of Establishment Clause attack is their neutrality towards religion.” The SAF program itself is neutral; its purpose is to provide “a forum of speech and to support various student enterprises,” including newspapers, which reflect the “diversity and creativity of student life” at the University of Virginia.