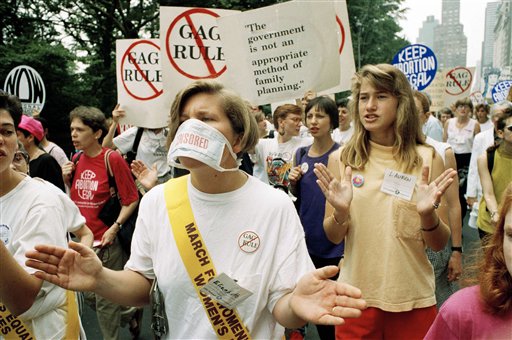 Protesters rallied at Columbus Circle in New York City in 1991, against the U.S. Supreme Court's ruling in Rust v. Sullivan that upheld a federal rule barring federally funded family planning clinics from discussing abortion. Some marchers wore gags or tape across their mouths to dramatize their feelings about the high court's "gag rule." (AP Photo/Mike Albans, used with permission of the Associated Press)

In Rust v. Sullivan, 500 U.S. 173 (1991), the Supreme Court narrowly upheld new government regulations that interpreted Section 1008 of Title X of the Public Health Services Act as prohibiting any health or medical professional receiving Title X funding from providing any counseling or information about abortion, thereby limiting the speech of those receiving government funding.

Section 1008 of the act specifies that none of the federal funds appropriated under the act’s Title X for family planning services can be used in programs in which “abortion is a method of family planning.”

The Court considered three challenges to the regulations.

The majority disposed of the first issue — statutory interpretation — by deciding that the law was valid under the Chevron rule, which held that reasonable executive applications of ambiguous statutory language required deference, even if these regulations revised long-standing interpretation.

The majority likewise rejected the claim by Justices Blackmun, Marshall, and Stevens that the executive’s “interference” in the doctor-patient relationship constituted a violation of a woman’s reproductive freedom under Roe v. Wade (1973). The majority cited a series of cases that interpreted Roe as not requiring states to fund abortions under Medicaid or to provide abortions in state hospitals.

Court: Restricting speech on abortion was OK because program did not fund it

The third issue was whether the regulations, which the challengers called a gag order, were consistent with the First Amendment rights of practitioners who received Title X funding by conditioning the receipt of federal funds on not engaging in particular types of speech.

The majority held that the regulations did not so interfere with First Amendment rights. According to the majority’s reasoning, abortion was beyond the scope of the services the government intended to fund under Title X, and refusing to fund speech that went beyond the scope of a program did not constitute the suppression of a particular point of view.

“When Congress established a National Endowment for Democracy to encourage other countries to adopt democratic principles,” wrote Chief Justice Rehnquist, “it was not constitutionally required to fund a program to encourage competing lines of political philosophy such as Communism and Fascism.”

Justice Blackmun’s dissent argued, conversely, that the regulations constituted both content- and viewpoint-based suppression of speech: “Whatever may be the Government’s power to condition the receipt of its largess upon the relinquishment of constitutional rights, it surely does not extend to a condition that suppresses the recipient’s cherished freedom of speech based solely upon the content or viewpoint of that speech.”

Blackmun asserted that the claims that the new regulations were not content- or viewpoint-based were implausible, because the regulations permitted discussion of a wide array of reproductive services aside from abortion and also compelled anti-abortion counseling.

The decision in Rust v. Sullivan left the issue of interpreting Section 1008 with the executive branch. As a result, the new regulations were almost immediately rescinded by President Bill Clinton and were not restored by the George W. Bush administration.

This article was originally published in 2009. Scott Lemieux is a Lecturer in the Political Science Department at the University of Washington.