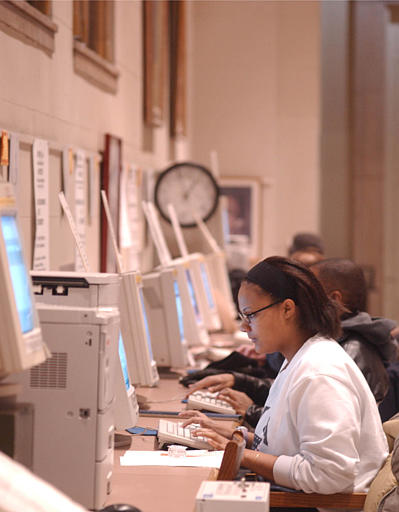 In this photo, Natalie Sanesi, works on a computer hooked up to the internet in the Philadelphia Free Library in 2003. The American Libary Association and the ACLU challenged a law that denied federal funding to libraries unless they restricted access to certain content, including obscenity and child pornography. But the Supreme Court in United States v. American Library Association (2003), upheld the law, comparing it to book selection decisions. (AP Photo/Sabina louise Pierce, used with permission from the Associated Press)

CIPA requires libraries, as a condition for receiving federal funding, to install filtering technology on all their Internet-enabled computers.

The filters must prevent access to visual depictions of obscenity and child pornography; for computers that are accessible to minors, visual depictions that are “harmful to minors” also must be filtered. The law contained a “disabling provision” that permitted libraries to disable the filters on the request of an adult who sought such disabling “for bona fide research or other lawful purpose.”

The American Library Association, the American Civil Liberties Union (ACLU), and a variety of other parties challenged the law on its face, making two principal arguments:

A three-judge panel ruled unanimously in favor of the petitioners, but in a 6-3 vote the Supreme Court rejected the facial challenge.

Chief Justice William H. Rehnquist’s opinion for a plurality of four justices analogized Internet filtering to book selection decisions. Because decisions as to which books to have in a library’s collection were part of the library’s traditional “mission of facilitating learning and cultural enrichment,” such decisions were within the discretion of the library.

The plurality also rejected the unconstitutional conditions doctrine argument, concluding that because libraries could simply refuse the federal funds, their free speech rights were not being infringed.

In two separate concurring opinions, Justices Anthony M. Kennedy and Stephen G. Breyer reasoned that the statute should be upheld primarily because of the disabling provision.

Kennedy concluded that if the disabling provision were interpreted to mean that “a librarian will unblock filtered material or disable the Internet software filter without significant delay” for any adult who so requests, then the facial challenge to the statute should fail. Justice Breyer concluded that the disabling provision rendered the statute no “more onerous than traditional library practices associated with segregating library materials in, say, closed stacks, or with inter-library lending practices.”

Both Justices Kennedy and Breyer invited as-applied challenges to the statute if a particular library failed to disable the filters expeditiously upon an adult’s request.

Souter compared law to 'cutting pages out of an encyclopedia'

Justice John Paul Stevens dissented, writing that the CIPA “operates as a blunt nationwide restraint on adult access to an enormous amount of valuable information.” He also concluded that the statute violated the “unconstitutional conditions” doctrine because it “penaliz[ed]” libraries that refused to use filters.

In another dissent, Justice David H. Souter compared Internet filters to “cutting pages out of an encyclopedia” and concluded that such content-based censorship violated the First Amendment.