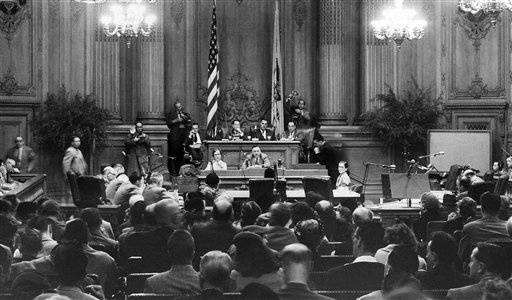 Barenblatt v. United States, 360 U.S. 109 (1959) presented the Supreme Court with two issues: whether the government, through the House Un-American Activities Committee, could compel persons to respond to questions about their political affiliations and whether the perceived threat of domestic communism justified curtailing speech in ways that would otherwise be constitutionally suspect. This was the general scene in the supervisor’s chambers of the San Francisco City Hall on Dec. 1, 1953 as the House Un-American Activities Committee, headed by Rep. Harold H. Velde of Illinois opened 10 days of hearings. (AP Photo, used with permission from the Associated Press)

Barenblatt v. United States, 360 U.S. 109 (1959) presented the Supreme Court with two issues: whether the government could compel persons to respond to questions about their political affiliations and whether the perceived threat of domestic communism justified curtailing speech in ways that would otherwise be constitutionally suspect.

Court sustained conviction for refusing to answer questions by HUAC

Appearing to retreat from an earlier decision in Watkins v. United States (1957), the Court, in a 5-4 decision, sustained Lloyd Barenblatt’s conviction for refusing to answer questions posed to him by the House Un-American Activities Committee (HUAC).

Barenblatt had refused to answer whether he was a Communist

The U.S. House of Representatives formed HUAC in 1938 to investigate the domestic activities of the Communist Party of the United States. In 1956 the committee subpoenaed Barenblatt, a professor of psychology at Vassar College, because another witness had informed the committee that Barenblatt had been a member of the Communist Club while a graduate student and a teaching fellow at the University of Michigan in the late 1940s.

Barenblatt appeared before the committee, but he refused to answer when asked whether he was or ever had been a member of the Communist Party. Rather, he submitted a statement explaining that the First Amendment protects citizens against government inquiries into their political beliefs and affiliations. The committee then found Barenblatt in contempt of Congress, and he was eventually convicted of the charge, fined $250, and sentenced to six months in prison.

Justice John Marshall Harlan II, writing for the majority, acknowledged that Congress’s power of inquiry is limited by the provisions of the Constitution and the Bill of Rights, including the First Amendment. To determine whether the committee had transgressed the First Amendment, the Court had to determine the relative importance of the government and individual interests at stake.

Harlan followed the logic of Dennis v. United States (1951), arguing that the Communist Party’s goal of overthrowing the U.S. government by force posed a special danger to the United States and made Congress’s power to investigate the Communist Party broader than its power to investigate other parties. He identified the government’s interest as “self-preservation,” which he found weightier than Barenblatt’s interest in silence.

Harlan rejected Barenblatt’s argument that the committee’s real motivation was to expose and humiliate rather than to achieve a legitimate legislative goal. The Court could not judge the legislature on the basis of motives, asserted Harlan.

In his dissent, Justice Hugo L. Black argued that the committee had violated the First Amendment by compelling answers to questions about political affiliation. Black maintained that for the judiciary to apply a balancing test in cases of direct abridgement of speech was to abandon its proper role as protector of individual rights. Even if a balancing test were appropriate, he continued, the Court had weighed the wrong interests.

The real interest represented by Barenblatt’s position was the interest of all citizens in being able to seek private affiliations, to think in unpopular ways, and to experiment politically. Furthermore, he argued, the government’s interest in self-preservation did not require it to curtail speech. Black alluded here to the “marketplace of ideas,” asserting that, through open discussion, citizens are able to reject wrong ideas. Black also pointed out that the Court had effectively outlawed the Communist Party of the United States, which was constitutionally impermissible.

As for the legislature, Black found that its purpose in this case was public shaming by making the types of allegations that had caused people to lose their jobs.

In his own separate, short dissent, Justice William J. Brennan Jr. claimed that the purpose of the HUAC’s investigations — exposure — was not sufficient to outweigh freedom of speech.

This article was originally published in 2009. Katrina Hoch was a doctoral student at the University of California San Diego.