By John R. Vile
Related cases in Government Investigations and Freedom of Association 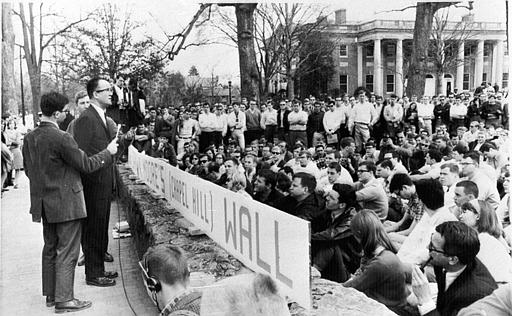 Frank Wilkinson, a public housing official who lost his job during the 1950's "Red Scare" speaks to University of North Carolina students in 1966 in Chapel Hill. Wilkinson was convicted for not answering questions of the House Un-American Activities Committee that was investigating Communist infiltration. Wilkinson argued that the committee's activities violated the First Amendment, but the Supreme Court in Wilkinson v. United States (1957) upheld the conviction. (AP Photo/Perry Aycock, used with permission from the Associated Press)

The Court found that the questioning was not in violation of Wilkinson’s First Amendment rights of free speech and association.

Called before the HUAC in Atlanta, Frank Wilkinson invoked his First Amendment rights in refusing to say whether he was a member of the Communist Party, even after the committee’s staff director explained that the committee was investigating communist party activities. The case is unique in that the HUAC committee appears to have targeted Wilkinson largely because of his own criticism of the committee’s activity. An appeals court had affirmed Wilkinson’s conviction.

In a 5-4 decision for the Supreme Court upholding the conviction, Justice Potter Stewart indicated that despite the breadth of House Rule XI, authorizing HUAC, the Committee had more specifically indicated the relevance of its Atlanta investigation both to potential lawmaking and to fact gathering. Stewart refused to question the motives of committee members.

Dissent: Committee had no congressional authority to investigate its critics

In a dissenting opinion joined by Chief Justice Earl Warren and Justice William O. Douglas, Justice Hugo L. Black — who read his entire decision on the day the case was decided — indicated that this decision could be distinguished from Barenblatt on the basis that the committee had no congressional authority to investigate its own critics.

He observed that former testimony regarding Wilkinson’s affiliations was “almost totally worthless for the purpose of establishing probable cause.”

In a separate dissent, Justice Douglas argued that the rights involved in the case included the right to peaceable assembly and petition. In a separate dissent, Justice William J. Brennan Jr. thought it was clear “that the dominant purpose of the questions was not to gather information in aid of lawmaking or law evaluation but rather to harass the petitioner and expose him for the sake of exposure.”

Wilkinson was unsuccessful in getting his contempt conviction overturned

Wilkinson, who served a jail term for contempt of Congress, has subsequently received numerous awards from civil liberties groups. A decision in Wilkinson v. Federal Bureau of Investigation (C.D. Cal. 1986), revealed that the FBI had collected a dossier of more than 132,000 pages of reports on him and on the National Committee Against Repressive Legislation (NCARL), of which he was the executive director.

A book was written about him in 2005 — First Amendment Felon by Robert Sherrill.