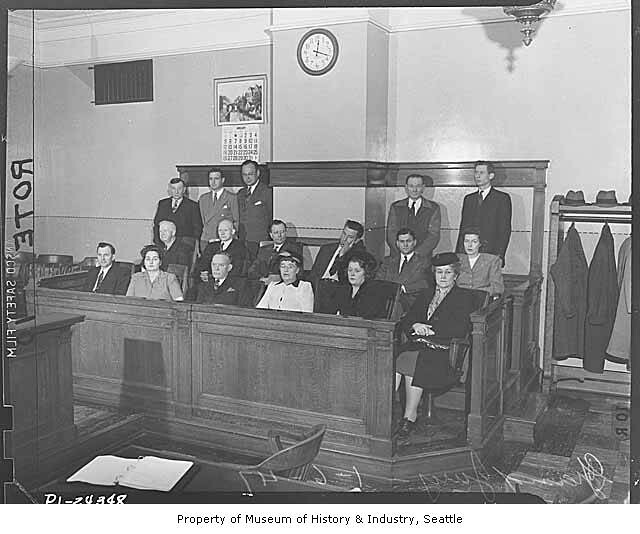 In Butterworth v. Smith, 494 U.S. 624 (1990), the Supreme Court ruled that states may not prohibit grand jury witnesses from disclosing their testimony after the grand jury term has expired. Such a prohibition, the Court said, violates witnesses’ First Amendment rights. (Image of grand jury in Seattle, Jan. 6, 1947, via Museum of History and Industry, CC BY 2.0)

In Butterworth v. Smith, 494 U.S. 624 (1990), the Supreme Court ruled that states may not prohibit grand jury witnesses from disclosing their testimony after the grand jury term has expired. Such a prohibition, the Court said, violates witnesses’ First Amendment rights.

Michael Smith was a reporter for the Charlotte Herald-News in Charlotte County, Florida. While writing a series of articles, Smith gathered information concerning alleged wrongful conduct in the county’s state attorney’s office and sheriff’s department. He was called to testify before a Florida grand jury investigating those improprieties.

After the grand jury ended its investigation, Smith desired to write about both the information he had obtained and his grand jury experience. At the time, however, a Florida statute prohibited him from disclosing his grand jury testimony, so he filed a lawsuit in a U.S. district court, charging that the statute violated his free speech rights.

The trial court found that the ban was necessary to protect the proper functioning of grand juries. On appeal, the 11th U.S. Circuit Court of Appeals reversed, holding that Florida’s interests in protecting its grand juries’ confidentiality were outweighed by witnesses’ First Amendment rights.

The Supreme Court unanimously affirmed. Writing for the Court, Chief Justice William H. Rehnquist agreed that most of a state’s interests in grand jury secrecy diminish when the jury completes its term. Therefore, while a state can prohibit witnesses from revealing their testimony while the grand jury is sitting, it cannot silence them after the investigation is completed.

In reaching its decision, the Court carefully considered a state’s interests in grand jury secrecy.

The Court recognized that these include making it easier for reluctant witnesses to come forward voluntarily with the knowledge that the subject of the investigation will not know of the witness’s testimony, and encouraging honest testimony, as unknown witnesses will not be subject to harassment or retribution.

In addition, secrecy minimizes the risk that persons about to be indicted will flee or attempt to influence grand jurors’ voting on the indictment. Confidential proceedings also protect persons who are investigated and ultimately exonerated.

The Court noted that the state’s interests in protecting and encouraging witnesses, while important, are adequately protected because each witness reserves the right to decide whether to disclose his or her own testimony. The interests related to looming indictments cease to exist.

According to the Court, the state’s only interest to survive a grand jury’s term is the desire to protect the reputation of those who are exonerated. When weighed against the First Amendment rights of witnesses, however, the reputational interest is insufficient to support a perpetual ban.

The Court further held that an automatic, permanent ban on witnesses’ speech increased the risk that grand jury subpoenas would be used for improper purposes.

Rehnquist noted, “The potential for abuse of the Florida prohibition, through its employment as a device to silence those who know of unlawful conduct or irregularities on the part of public officials, is apparent.”