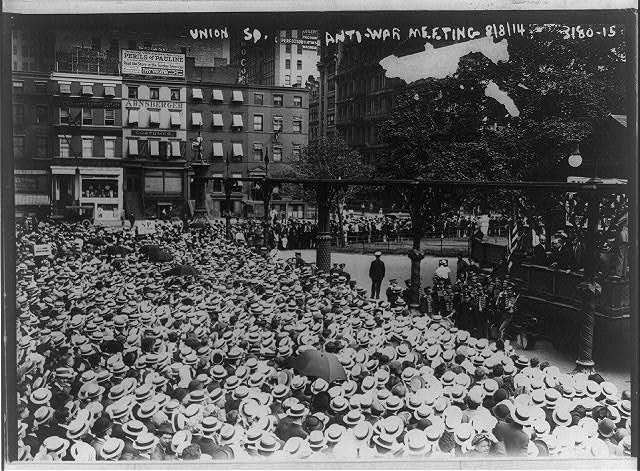 Anti-war demonstrations, like the 1914 one pictured here, took place in the United States leading up to and during World War I. The Espionage Act of 1917 tried to stifle political criticism of the war. In 1918, the government arrested five immigrants who had distributed leaflets condemning U.S. intervention in the Bolshevik revolution Russia. Although their leaflets did not concern the war with Germany, their conviction under the Espionage Act was upheld in Abrams v. United States (1919). The case later led to the development of thought that such political speech was protected under the First Amendment. (Image via Library of Congress, public domain)

In Abrams v. United States, 250 U.S. 616 (1919), the Supreme Court upheld the conviction of several individuals for the distribution of leaflets advocating their political views. This case is best remembered for the dissent written by Justice Oliver Wendell Holmes Jr. advancing the concept of a free marketplace of ideas.

During World War I, Jacob Abrams and four other Russian immigrants living in New York City had printed and distributed two leaflets condemning U.S. intervention in the Russian civil war involving the Bolsheviks (communists). The leaflets did not concern the war with Germany. In the course of an appeal to the “workers of America,” one leaflet advocated a general strike and a resort to arms if the United States intervened in Russia.

Justice John Clarke, writing for a seven-member majority of the Supreme Court, upheld the immigrants’ sentence of 20 years in prison for violating a 1918 amendment to the 1917 Espionage Act. The law made it a crime willfully to speak or publish “disloyal” language about the American political system or to incite or advocate “any curtailment of production . . . necessary or essential to the prosecution of the war . . . with intent . . . to curtail or hinder the United States in the prosecution of the war.”

Clarke applied the clear and present danger test advanced by Holmes in Schenck v. United States (1919) and found that the natural effect of Abrams and his colleagues’ actions was to “defeat the war plans of the Government” through the “paralysis of a general strike.”

Holmes advanced a more libertarian version of the clear and present danger test, finding that Abrams’s actions presented no real or immediate danger to the nation’s security, dismissing the leaflets as the “silly” actions of an “unknown man.” With free speech at issue, Holmes argued for a stricter standard for intent than had the majority. To Holmes, because Abrams intended to help Russia, not Germany, the First Amendment’s free speech clause protected the leaflets.

Holmes asserted that those who think they are right will find it “perfectly logical” to translate their convictions into the law and impose them on others, but it is “the theory of our Constitution” that the best test of truth is a “free trade in ideas” through the competition of debate and discussion.

Government is permitted to regulate expression only when it “so imminently threaten[s] immediate interference with the lawful and pressing purpose of the law that an immediate check is required to save the country.”