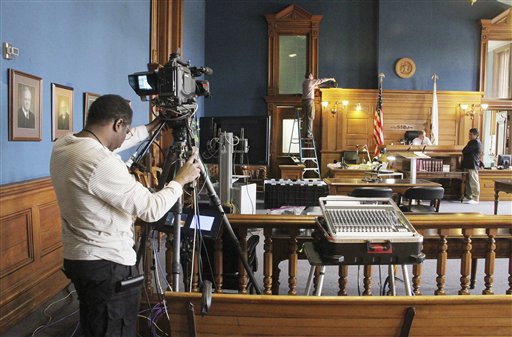 States continue to experiment with cameras in courtrooms and many have established ground rules to prevent disruptions or distractions. The Supreme Court ruled in a 1981 case that nothing in the Constitution prohibits cameras in courtrooms after two Miami Beach police officers argued they did not receive a fair trial because of the presence of a television camera.

In Chandler v. Florida, 449 U.S. 560 (1981), the Supreme Court ruled that the Constitution does not prevent states from allowing broadcast coverage of criminal trials.

The Court’s decision affirmed a Florida Supreme Court ruling that upheld the convictions of two men who claimed that the presence of cameras deprived them of their right to a fair trial.

The First and Sixth Amendment values in conflict in Chandler have been debated since the early days of the broadcast era.

Lindbergh kidnapping trial led to restrictions on cameras in courtrooms

The sensational 1935 trial of Bruno Hauptmann, who kidnapped the son of aviator Charles Lindbergh, marked a turning point. The circus-like atmosphere of the trial, caused in part by the radio coverage of the proceedings, led the American Bar Association to adopt rules against broadcast coverage. Most states followed suit, banning radio and then television from courtroom proceedings.

Several states, however, including Texas, continued to allow broadcast of trials, leading to the Supreme Court’s first ruling on the issue. A majority of the Court found in Estes v. Texas (1965) that the coverage of the trial of financier Billie Sol Estes was so pervasive that it violated his right to due process.

The Estes decision represented a setback for broadcast coverage, but did not hamper improvements in the technology that would change the terms of the debate. Cameras became smaller, and they no longer needed intrusive bright lights or cables. Broadcasters began to press for a resumption of broadcast coverage, and the Florida Supreme Court agreed in 1977.

One of the Florida trials in which cameras were allowed was that of Noel Chandler and Robert Granger, Miami Beach police officers accused of robbing a local restaurant. Both defendants objected to the presence of cameras, but the trial judge permitted them.

Both officers were convicted, and they appealed, claiming that the presence of cameras affected the ability of jurors to decide the case fairly. Florida courts upheld the convictions.

Chief Justice Warren E. Burger, writing for an 8-0 majority (Justice John Paul Stevens did not participate), said that the danger that jurors might be affected by the presence of cameras in a given case was not enough to justify an outright ban on broadcast coverage and that states were free to experiment in this area. The Court did not overrule Estes, but instead interpreted it narrowly.

The 1995 murder trial of former football player O. J. Simpson marked another milestone. Intense media interest in the trial was widely believed to have tainted the trial process.

The federal courts, which had been experimenting with cameras at the time, at first decided against expanding use of them, but with the advent of live streaming and other online technologies, appeals courts and some district courts made it easier for the public to listen to and, in some cases, watch federal court proceedings. Although the Chandler decision launched widespread experimentation at the state level, the justices continued to resist televised coverage of Supreme Court proceedings.

This article was originally published in 2009. Tony Mauro covered the U.S. Supreme Court for more than 40 years for several publications before being semi-retired in 2019. He served on the steering committee of The Reporters Committee for Freedom of the Press for 36 years, and was inducted into the Freedom of Information Hall of Fame for his advocacy for greater transparency in the federal courts.