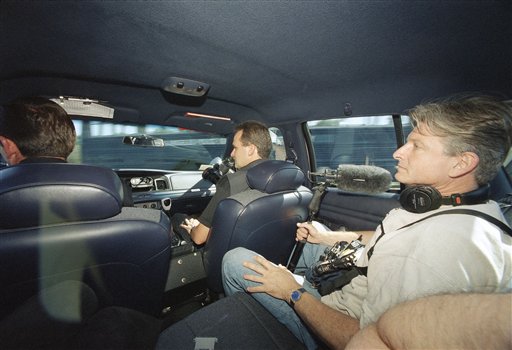 Police ride-alongs in which departments allowed the press to come with them into private homes during arrests were ruled to violate the Fourth Amendment protection against unlawful search and seizure by the Supreme Court in 1999. A Maryland man had sued after police brought a Washington Post reporter and photographer into his home in an attempt to arrest his son. In this 1998 photo, a soundman with the television show "LAPD: Life on the Beat" rides along with Los Angeles police. (AP Photo/Reed Saxon, used with permission from the Associated Press)

The Supreme Court decision in Wilson v. Layne, 526 U.S. 603 (1999), held that the Fourth Amendment protection against unlawful search and seizures prohibited the police from bringing members of the news media into private homes while executing search warrants.

However, the Court also found that the police officers involved were entitled to qualified immunity because the principle prohibiting accompanying media when searches were being executed had not been clearly established.

The case arose when officers arrived at the home of the parents of the suspect they were trying to arrest rather than at the home of the suspect himself. A reporter and a photographer from the Washington Post accompanied the officers into the house. The suspect’s father, Charles Wilson, sued the officers, claiming that his Fourth Amendment rights were violated when members of the media “rode along” with the officers to issue the arrest warrant. The district court denied the officers’ qualified immunity; the court of appeals reversed but did not address the Fourth Amendment question because no precedent existed. The Supreme Court granted certiorari on appeal.

Writing for the Court, Chief Justice William H. Rehnquist rejected arguments that the presence of the media might aid law enforcement, noting that he saw no way that their presence served the purposes of the search.

Pointing to decisions that had emphasized the privacy of the home, he concluded that this aspect of the “ride-along” program had been illegal.

Further responding to arguments that the presence of the media might publicize governmental efforts to combat crime and “facilitate accurate reporting on law enforcement activities,” Rehnquist agreed that First Amendment cases such as Cox Broadcasting Corp. v. Cohn (1975) and Richmond Newspapers, Inc. v. Virginia (1980) had established the importance of press access but noted the equally important rights protected by the Fourth Amendment.

Rehnquist observed that the media had not come to facilitate the work of the police in executing the warrant but for their own “private purposes.”

Justice John Paul Stevens agreed that the presence of the media in the home had been illegal but disagreed with the majority as to qualified immunity. He thought the occupants of the house should be able to sue the police for their misconduct.