By Richard Parker
Related cases in Military, Petition, Right to 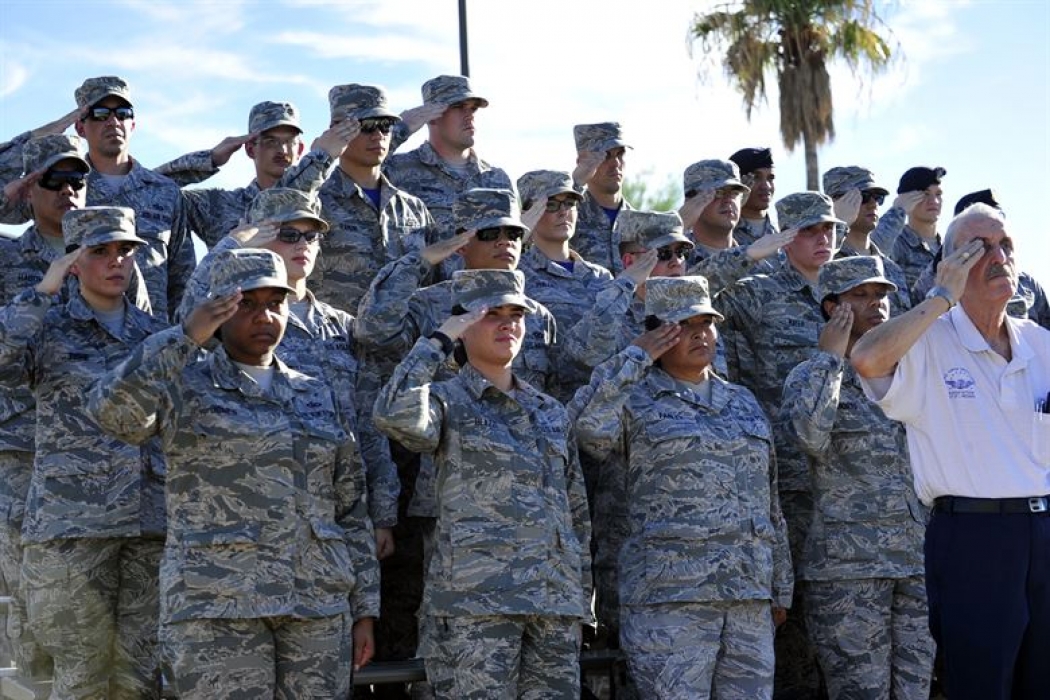 The Supreme Court in Brown v. Glines, 444 U.S. 348 (1980) ruled that persons serving in the military have the right to petition Congress via single-signature letters but may not circulate petitions to Congress without prior approval from a base commander. The Court determined that military regulations limiting the right to petition for armed-forces personnel do not violate the First Amendment. In this photo, Luke Air Force Base Airmen salute as Taps plays during the POW/MIA Recognition Day Retreat ceremony Sept. 18, 2015 near the wing headquarters building at Luke Air Force Base, Ariz. (U.S. Air Force photo by Senior Airman Grace Lee, public domain)

The Supreme Court in Brown v. Glines, 444 U.S. 348 (1980) ruled that persons serving in the military have the right to petition Congress via single-signature letters but may not circulate petitions to Congress without prior approval from a base commander. The Court determined that military regulations limiting the right to petition for armed-forces personnel do not violate the First Amendment.

While on active duty, Albert Glines, a captain in the Air Force Reserves, drafted and circulated petitions to members of Congress complaining about Air Force grooming standards. His actions violated Air Force regulations requiring prior approval for circulation of petitions, and he was removed from active duty. Glines sued, claiming that the regulations constituted an unconstitutional prior restraint and violated his First Amendment right to petition. A federal district court decided in his favor, and an appeals court affirmed.

The Supreme Court reversed the lower courts’ decisions. Justice Lewis F. Powell Jr., writing for a 5-3 majority, analogized the case to Greer v. Spock (1976), in which the Court upheld a base commander’s power to “prevent the circulation of materials that he determines to be a clear threat to the readiness of his troops.”

Powell grounded his analysis in the claims, announced in Parker v. Levy (1974), that the “military is, by necessity, a specialized society separate from civilian society” and that the risk of undermining the authority of commanding officers justifies the regulations. The Court concluded that the right of petition for service personnel is limited to “the communication of individual grievances” via writing.

Justices William J. Brennan Jr. and Potter Stewart wrote spirited dissents. Brennan argued that application of relevant civilian case law justified a decision for Glines, that Spock was an unsuitable precedent for the majority’s decision, and that the concept of military necessity is too overbroad and unclear to justify denial of service personnel’s First Amendment rights.

Stewart challenged the majority’s conclusion that guaranteeing service members’ right to petition could be satisfied via its limitation to individual letters.

The Court’s much-criticized decisions in Levy and Glines highlight the deference of the courts to the military’s need to maintain order and discipline.

Glines reached the court with Secretary of the Navy v. Huff (1980), in which the Court issued a brief per curiam opinion asserting that Huff was settled by Glines.