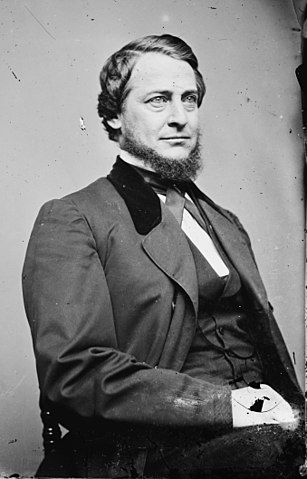 Clement Vallandingham was arrested under martial law for making an inflammatory speech during the Civil War. In Ex Parte Vallandigham (1863), the Supreme Court decided that it had no jurisdiction to hear Vallandingham's appeals because the case came from a military commission. The Court missed an opportunity to set an important precedent on behalf of First Amendment freedom of speech. (Image via Library of Congress, public domain)

In Ex parte Vallandigham, 68 U.S. 243 (1863), the Supreme Court decided that it had no jurisdiction to hear appeals from a military commission that had sentenced a gubernatorial candidate to life in prison for an inflammatory speech, thus missing an opportunity to set an important precedent on behalf of freedom of speech.

The case arose after Gen. Ambrose Burnside followed up on President Abraham Lincoln’s declaration of martial law by issuing a general order declaring that he would try individuals as spies or traitors for declaring their sympathies for the enemy.

In May 1863, Clement L. Vallandigham, a former congressional representative from Ohio who was running for governor as a “peace” candidate, gave a fiery speech in which he pronounced that “the sooner the people inform the minions of usurped power that they will not submit to such restrictions upon their liberties, the better” (Swisher 1974: 925).

The military therefore subsequently arrested Vallandigham and tried him, although Lincoln decided to commute the sentence from imprisonment to exile beyond enemy lines. Vallandigham went to Canada and continued his ultimately unsuccessful political campaign.

Vallandigham’s case ultimately made it to the Supreme Court, which declared that the Constitution had not granted it any power to review the decisions of military tribunals. After the war, the Court declared in Ex parte Milligan (1866) that military courts had no power to try civilians outside a war zone.

Seeking to defend Vallandigham’s trial by the military commission, Lincoln rhetorically asked, “Must I shoot a simple-minded soldier boy who deserts, while I must not touch a hair of the wily agitator who induces him to desert?” (Swisher 1974: 928).

Further answering those who feared that the trial might set a bad precedent, Lincoln said that he was no more able “to believe that a man could contract so strong an appetite for emetics during temporary illness, as to persist in feeding upon them during the remainder of his healthful life” (Swisher 1974: 928).

Chief Justice William Rehnquist (1998) observed that Lincoln’s argument for detaining individuals who had engaged in sabotage was “stronger” than “for arresting and trying Vallandigham, who had simply expressed views strongly critical of the administration” (p. 73).

Vallandigham returned to Ohio after the war and practiced law. He died in 1871 after accidentally shooting himself while attempting to show that a victim had committed suicide rather than being killed by his client.