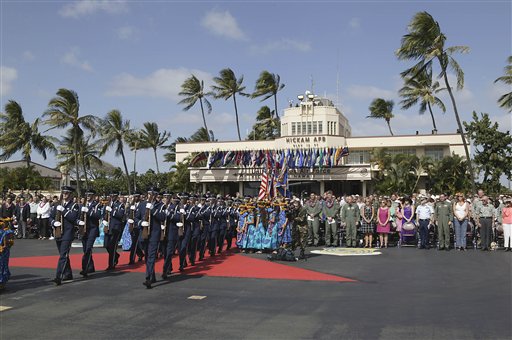 James Albertini had been barred from entering Hickam Air Force Base in Hawaii but contended his First Amendment rights were violated when he entered nine years later during an open house without disrupting activities. However, the U.S. Supreme Court reasoned that the base did not become a public forum just because of an open house, and that the law under which he was barred re-entry was content neutral and served a signficant government interest. (Photo of Hickam Air Force base in 2006 during an arrival ceremony for new cargo planes, AP Photo/Marco Garcia, used with permission from The Associated Press)

In United States v. Albertini, 472 U.S. 675 (1985), the Supreme Court ruled that a man could be convicted under federal law for entering a military base during an open house event because he had been barred from reentering the base years earlier.

It was not an infringement of his First Amendment rights because an open house on a military base is not considered a public forum and, as a result of his previous actions and subsequent receipt of a bar letter, he could be considered a threat to national security.

In 1972, James Albertini had received a “bar letter” from the commander of Hickam Air Force Base in Hawaii forbidding him from entering the base without written permission after Albertini and a companion had gone on base and poured animal blood on military documents.

When Albertini returned with some friends during the base’s open house nine years later, he engaged in a peaceful demonstration in front of a B-52 bomber display and had taken pictures but otherwise had not disrupted the activities.

Albertini and his companions were escorted off base, and Albertini was convicted in federal district court of violating Title 18 U.S.C. 1382, which makes it unlawful to reenter a military base after being “ordered not to reenter by any officer in command or charge thereof.” The court of appeals reversed, finding that Albertini had a First Amendment right to set foot on base because it temporarily had become a public forum during open house day. The Court reversed and remanded the case.

Justice Sandra Day O’Connor wrote the decision for the Court, which centered on what she considered to be the plain meaning of the statute under which the base commander had issued the bar letter. She did not think the letter was invalidated by the passage of time, by the fact that the base was having an open house, or by Albertini’s subjective belief that his attendance was legal.

She rejected the idea that the base was converted into an open forum simply because it had an open house. She observed that the law under which the bar letter had been issued was “content-neutral and serves a significant Government interest by barring entry to a military base by persons whose previous conduct demonstrates that they are a threat to security.”

She thought the law could be justified as consistent with the First Amendment, writing: “The First Amendment does not bar application of a neutral regulation that incidentally burdens speech merely because a party contends that allowing an exception in the particular case will not threaten important government interests.”

In a dissent joined by William J. Brennan Jr. and Thurgood Marshall, Justice John Paul Stevens indicated that he did not believe Congress had intended to punish visits to a military reservation under the circumstances of this case.

He thought the law was chiefly intended to apply to trespasses rather than to individuals visiting during an open house. He also focused on the length of time that had passed since the commander had issued the order.