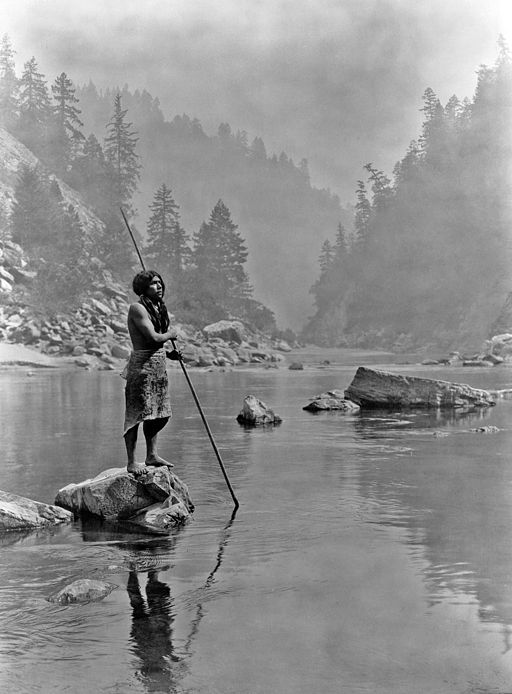 Native Americans argued that the federal government's plan to build a road through their sacred religious sites in California would violate the tribe's religious liberty rights. The Supreme Court decided in 1988 that building such a road through the Six Rivers National Forest, which bordered on the Hoopa Valley Indian Reservation, and included many traditional religious sites, would not impede the First Amendment rights to freely practice their religion. This photo is of a Hupa Indian in 1923 in the Hoopa Valley. (Image via Library of Congress, public domain)

In Lyng v. Northwest Indian Cemetery Protective Association, 485 U.S. 439 (1988), the Supreme Court held that the free exercise clause of the First Amendment does not prohibit the federal government from timber harvesting or constructing a road through a portion of a national forest that is considered a sacred religious site by three Native American tribes.

The case began when three Native American tribes tried to prevent the federal government from building a road through an area central to their religious activities.

After losing in the lower courts, the secretary of agriculture appealed to the Supreme Court, claiming that the building of the road did not violate the tribes’ free exercise rights.

The Court sided with the secretary of agriculture, reasoning that the Native American tribes were not “coerced by the Government’s actions into violating their religious beliefs.”

The Court, moreover, held that the federal government’s programs must treat religious and nonreligious individuals alike. Writing for the majority, Justice Sandra Day O’Connor said, “However much we might wish that it were otherwise, government simply could not operate if it were required to satisfy every citizen’s religious needs and desires.”

In dissent, Justice William J. Brennan Jr. held that coercion is not a good measure of whether religious activities are protected under the free exercise clause and that the building of the road would destroy the tribes’ religion.