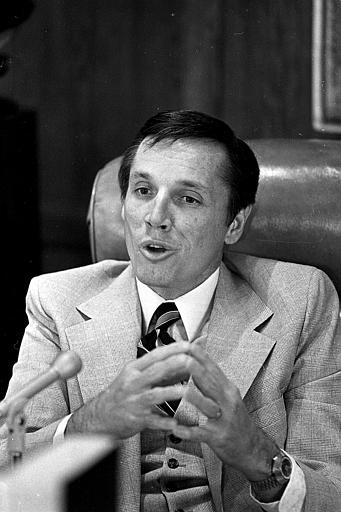 In this photo, Bob Jones III discusses the basic philosophy taught at the university named after his grandfather in Greenville, S.C., on Nov. 4, 1982. At Bob Jones University, a strict code of ethics was observed and black students only date among themselves. This ban on interracial dating along with other racially discriminatory practices resulted in BJU losing their tax exempt status. The Supreme Court determined in Bob Jones University v. United States, 461 U.S. 574 (1983), that the Internal Revenue Service (IRS) may deny tax-exempt status to institutions, such as BJU, whose policies are “contrary to established public policy,” even if those policies are based on religious beliefs. (AP Photo, used with permission from the Associated Press)

The Supreme Court determined in Bob Jones University v. United States, 461 U.S. 574 (1983), that the Internal Revenue Service (IRS) may deny tax-exempt status to institutions whose policies are “contrary to established public policy,” even if those policies are based on religious beliefs.

Section 501(c)(3) of the Internal Revenue Code provides tax exemptions for eight classes of organizations — including charitable, educational and religious institutions — that, according to the Court, provide “beneficial and stabilizing influences in community life.”

Such institutions’ racial policies had no impact on their tax status until 1970, when the IRS ruled that racially discriminatory practices would render an institution not “charitable” as they violated federal policy. This new interpretation of section 501(c)(3) followed a federal district court injunction preventing the IRS from granting exempt status to private schools in Mississippi that practiced racial discrimination in admissions.

In 1970, the IRS notified Bob Jones University of South Carolina, Goldsboro Christian Schools of North Carolina, and some other private Christian educational institutions that to maintain or receive tax-exempt status, they would have to modify racially discriminatory admissions and association policies.

Bob Jones University began to admit African-Americans in 1971, but maintained its ban on interracial dating and marriage, while the Goldsboro Christian School refused to admit minority students. Each of these institutions had been granted tax-exempt status years earlier.

When the IRS revoked Bob Jones University’s tax-exempt status in 1976, retroactive to 1970, the college sued, arguing that the IRS had made two errors. First, the IRS lacked the authority to modify the code in this manner. Second, the university’s policy was based on religious beliefs protected by the First Amendment. The Supreme Court heard the case in 1982.

The IRS argued that section 501(c)(3) implied that tax-exempt institutions had to meet common law definitions for charitable trusts: they had to provide a public benefit and not be opposed to fundamental public policy.

Chief Justice Warren E. Burger, writing for the eight-justice majority, found that the IRS interpretation was correct and that the government’s purpose of eliminating discrimination in education was so fundamental to public policy that it overrode Bob Jones University’s religious convictions.

Burger also noted that Congress was aware of the IRS interpretation and had not challenged it, despite a dozen opportunities to do so, which implied congressional approval. The Court held that federal administrative agencies could articulate new policies subject to veto by Congress.

After the Court’s decision was handed down, Congress modified the language of section 501(c)(3) to deny exempt status to institutions that have discriminatory policies.

This article was originally published in 2009. Dr. Michael P. Bobic, who worked as an assistant political science professor at Glenville State College in West Virginia, is author of With the People's Consent: Howard Baker Leads the Senate 1977-1984.