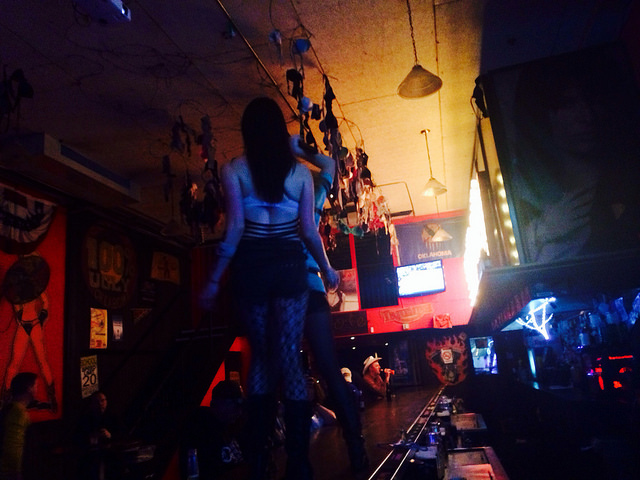 In a Kentucky case, the Supreme Court affirmed that local governments can regulate alcohol, including barring establishments that serve alcohol from having nude dancing. (Illustrative photo via flickr by Thought Catalog CC BY 2.0)

The Supreme Court in City of Newport v. Iacobucci, 479 U.S. 92 (1986), affirmed the power of local government to ban nudity in establishments serving alcohol.

Nicholas Iacobucci, owner of Talk of the Town, challenged the law on First Amendment grounds. A district court upheld Newport’s ban, relying on New York State Liquor Authority v. Bellanca (1981), in which the Supreme Court decided that a similar New York regulation was constitutional because of the states’ broad powers to regulate alcohol under the Twenty-first Amendment.

The Sixth Circuit Court of Appeals struck down the Kentucky ordinance because it had been enacted by a city, not a state. It remanded the case to determine whether the ban was a valid exercise of the city’s police powers.

As in Bellanca, the Supreme Court held no oral argument and upheld the state law in a 5-4 per curiam opinion. The Court determined the case to, indeed, be controlled by Bellanca. Under the Twenty-first Amendment, the states “may delegate this power [to regulate alcohol] as they see fit.” With this additional authority added to traditional police powers, the Court wrote, “it is plain that, as in Bellanca, the interest in maintaining order outweighs the interest in free expression by dancing nude.”

Joined by Justice William J. Brennan Jr., Stevens argued that the Court had “completely distorted the Twenty-First Amendment,” rendering it “toothless except when freedom of speech is involved.” Stevens raised the possibility of states regulating other protected expressions in establishments with liquor licenses, including banning a production of Rent if champagne is served at intermission or arresting Paul Robert Cohen — the litigant in Cohen v. California (1971) — for wearing a jacket bearing an expletive at Yankee Stadium.

Stevens concluded, “I continue to believe that the Court is quite wrong in proceeding as if the Twenty-first Amendment repealed not only the Eighteenth Amendment, but some undefined portion of the First Amendment as well.”

Justice Antonin Scalia would have granted the petition for certiorari and set the case for oral argument. Justice Thurgood Marshall also dissented from the summary judgment.

This article was originally published in 2009. Frank J. Colucci is associate professor of political science at Purdue University Northwest.  He is author of Justice Kennedy's Jurisprudence: The Full and Necessary Meaning of Liberty, which contains extended analysis of his critical opinions involving religion and  free speech and religion.  He also served as a Fellow at the Keller Center for the Study of the First Amendment at the University of Colorado.