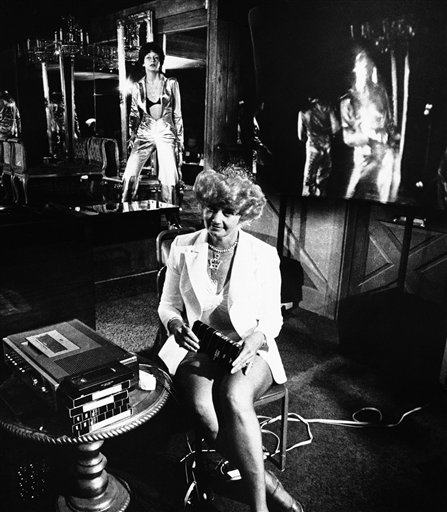 In this photo Cathi Schutzler, owner of Diamond Lil’s Saloon, operates cassette film for dancer Kim Thompson, 24, on April 22, 1978. On screen, dancer strips nude: On stage, the dancer does the same routine at the same time live, but strips only as far as a skimpy bikini-type outfit. Miss Schutzler says she believes this does not violate Tampa’s law banning nude dancing in bars where alcohol is sold where alcohol is sold. This law is similar to a New York law involved in New York State Liquor Authority v. Bellanca (1981). The Supreme Court upheld the power of states to ban nude dancing in businesses where alcohol is sold, finding that it was not a violation of the First Amendment’s right to free speech. (AP Photo/FF, used with permission from the Associated Press)

The Supreme Court decision in New York State Liquor Authority v. Bellanca, 452 U.S. 714 (1981) upheld the power of states to ban nude dancing in businesses where alcohol is sold, finding that it was not a violation of the First Amendment’s right to free speech.

New York amended its Alcoholic Beverage Control Law in 1977 to prohibit nude dancing in establishments with a license to serve alcohol to be consumed on premises. Violators could lose their liquor license. Dennis Bellanca, owner of “The Main Event,” and other nightclub owners challenged the law as a violation of free speech. New York state courts found in their favor.

In a per curiam opinion issued without oral argument, the Supreme Court reversed by a 7-2 vote. The Court justified its ruling under the Twenty-first Amendment. “The State’s power to ban the sale of alcoholic beverages entirely,” it wrote, “includes the lesser power to ban the sale of liquor on premises where topless dancing occurs.” Citing California v. LaRue (1972), the Court argued New York had “chosen to avoid the disturbances associated with mixing alcohol and nude dancing by means of a reasonable restriction on establishments which sell alcohol for on-premises consumption.”

The Court did not decide whether nude dancing enjoys First Amendment protection, but it did state that “whatever artistic and communicative value may attach to topless dancing is overcome by the State’s broad exercise of its powers arising under the Twenty-First Amendment.”

Dissenters thought the Court gave states too much power

Justice William J. Brennan Jr. dissented and would have set the case for oral argument.

Justice John Paul Stevens also dissented, claiming the Court departed from its decisions in LaRue and in Craig v. Boren (1976) by giving states too much power under the Twenty-first Amendment to override other constitutional provisions. Stevens did not decide whether nude dancing is entitled to free expression protection or whether New York’s prohibition was a legitimate use of state police powers to prevent nuisances and preserve peace. He indicated he might vote to uphold the law on the merits. Nevertheless, “the Court should not continue to obscure that issue with irrelevancies such as its mischievous suggestion that the Twenty-First Amendment gives States power to censor free expression in places where liquor is served.”

This article was originally published in 2009. Frank J. Colucci is associate professor of political science at Purdue University Northwest.  He is author of Justice Kennedy's Jurisprudence: The Full and Necessary Meaning of Liberty, which contains extended analysis of his critical opinions involving religion and  free speech and religion.  He also served as a Fellow at the Keller Center for the Study of the First Amendment at the University of Colorado.