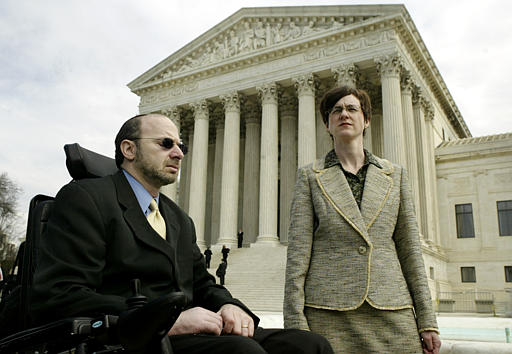 Associate Legal Director of the ACLU Ann Beeson, right, and her client Dr. Mitch Tepper pause during a news conference outside the Supreme Court in 2004 during Ashcroft v. ACLU. The case involved the 1998 Child Online Protection Act which made it a crime for commercial websites to knowingly place material that is "harmful to minors" within their unrestricted reach. The American Civil Liberties Union claimed the law violated the First Amendment guarantee of free speech. In 2004, the Supreme Court blocked enforcement of the law. (AP Photo/Evan Vucci, reprinted with permission from The Associated Press)

In Ashcroft v. American Civil Liberties Union, 535 U.S. 564 (2002), a fractured Supreme Court temporarily avoided deciding the constitutionality of a federal law designed to protect children from Internet pornography, sending the case back to the 3rd U.S. Circuit Court of Appeals for further review.

Court had struck down CDA for its chilling effect on speech

Congress first attempted to protect children from Internet pornography in the Communications Decency Act (CDA) of 1996.

In Reno v. American Civil Liberties Union (1997), however, the Court struck down key provisions of the act because the statute failed specifically to define the terms indecent and patently offensive and would likely “chill” or silence constitutionally protected speech, that is, nonobscene speech aimed at adults.

Congress responded to the Court’s decision with the Child Online Protection Act (COPA) of 1998, which was narrower than the CDA because it attempted to prohibit material harmful to minors based on contemporary community standards.

The law was immediately challenged, and a federal district court granted a preliminary injunction stating that the statute would likely place a burden on some protected speech and that less restrictive means existed to protect children.

The 3rd Circuit affirmed the preliminary injunction, ruling the “community standards” language in COPA unconstitutionally broad. The case was subsequently appealed to the Supreme Court.

Court remanded case to decide whether COPA was constitutional

In Ashcroft v. American Civil Liberties Union the Court held 8-1 that the breadth of the community standards language did not in itself invalidate the law.

According to the Court, however, proper judicial deference required that the justices first allow the 3rd Circuit to rule on the other questions in the case:

Justice Clarence Thomas delivered the opinion of the fractured Court with separate concurrences by multiple justices and the lone dissent by Justice John Paul Stevens.

The case returned to the Supreme Court in Ashcroft v. American Civil Liberties Union, 542 U.S. 656 (2004), with a 6-3 majority agreeing with the lower court’s ruling that COPA did not pass the strict scrutiny test used to judge obscenity cases: It failed to be narrowly tailored and to incorporate the less restrictive means — for example, blocking and filtering software — of protecting children from otherwise constitutionally protected speech.

Justice Anthony M. Kennedy, who delivered the majority opinion, explained that “[f]ilters are less restrictive than COPA. They impose selective restrictions on speech at the receiving end, not universal restrictions at the source. . . . [T]he Government failed to introduce specific evidence proving that existing filtering technologies are less effective than the restrictions in COPA.”

In dissent, Justice Stephen G. Breyer, joined by Chief Justice William H. Rehnquist and Justice Sandra Day O’Connor, disagreed with Kennedy’s characterization of filters: “The presence of filtering software is not an alternative legislative approach to the problem of protecting children from exposure to commercial pornography. Rather, it is part of the status quo, i.e., the backdrop against which Congress enacted the present statute.”

Mark Segal, publisher of the Philadelphia Gay News and one of the organizations that had challenged the law, wrote in 2021 that the decision allowed his organization to keep printing "life-saving safe sex education" information that was critical to its audience during the HIV/AIDS crisis.

Since COPA, Congress has continued to legislate to protect children from what it considers to be harmful Internet content.

For example, federal law now prohibits misleading Internet domain names, such as the infamous “whitehouse.com” website, which has since been removed.

In addition, a “Dot Kids” second-level Internet domain was created specifically for content suitable for minors under the age of 13.

This article was originally published in 2009 and updated in 2021. Artemus Ward is professor of political science faculty associate at the college of law at Northern Illinois University. Ward received his Ph.D. from the Maxwell School of Citizenship & Public Affairs at Syracuse University and served as a staffer on the House Judiciary Committee. He is an award-winning author of several books of the U.S. Supreme Court and his research and commentary have been featured in such outlets as the New York Times, Los Angeles Times, Associated Press, NBC Nightly News, Fox News, and C-SPAN.