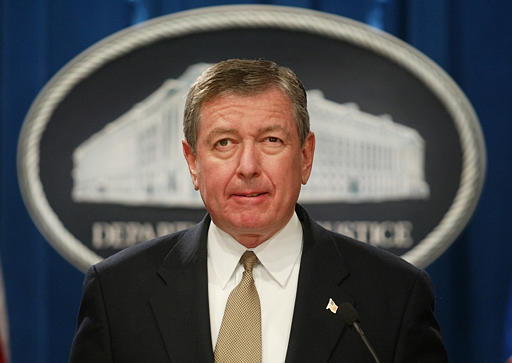 Attorney General John Ashcroft meets reporters at the Justice Department in Washington Tuesday, April 16, 2002 where he denounced the Supreme Court's decision to strike down a 1996 child pornography law on free speech grounds. (AP Photo/Pablo Martinez Monsivais, reprinted with permission from The Associated Press.)

In Ashcroft v. Free Speech Coalition, 535 U.S. 234 (2002), the Supreme Court struck down portions of the federal Child Pornography Prevention Act (CPPA) of 1996 that banned “virtual child pornography,” which the justices said was neither obscene nor actual child pornography as defined by previous decisions.

Congress began proscribing child pornography in 1977, and the law at issue in this case was their most recent attempt to broaden the ban by including any depiction that “appears to be” or “conveys the impression” of a minor engaging in sexually explicit conduct.

These sections of CPPA represented an attempt to outlaw virtual child pornography, which Congress was particularly concerned about due to the growth of computer technology and the Internet.

Though no actual children were involved, the material in question often used computer imaging, adults who appeared to be minors, or both to create the impression of minors engaging in sexual activity.

Congress reasoned that pedophiles might “whet their own sexual appetites” with this material “thereby increasing the creation and distribution of child pornography and the sexual abuse and exploitation of actual children.”

Members of Congress also contended that pedophiles might use virtual child pornography to encourage children to participate in sexual activity. They argued, furthermore, that the existence of virtual material made it harder to distinguish from actual child pornography and therefore more difficult to prosecute the latter.

In Miller v. California (1973), the Court had articulated a test to determine obscenity: if the average person in the community would find the work’s predominant theme “prurient”; if the material depicts sexual conduct in a “patently offensive way”; and if when taken as a whole the material “lacks serious literary, artistic, political, or scientific value.”

In the other precedent, New York v. Ferber (1982), the Court upheld prohibitions on the production and distribution of actual child pornography because of its direct link to the sexual abuse of minors.

Kennedy wrote that the Child Pornography Prevention Act was overbroad because it banned a “significant universe of speech that is neither obscene under Miller nor child pornography under Ferber.”

Kennedy says some films, like Romeo and Juliet, could be considered child pornography

As examples of the kind of material that could be prohibited under CPPA, Kennedy listed a picture in a psychology manual and well-known, award-winning theatrical films that portray minors having sex, such as Romeo and Juliet and Traffic.

He explained that “in contrast to Ferber, CPPA prohibits speech that records no crime and creates no victims by its production.” Indeed, Kennedy noted that the majority in Ferber reasoned that young-looking adults could be used if necessary for scientific and artistic purposes.

As for the argument that virtual child pornography could be used by pedophiles to seduce children into sexual activity, Kennedy countered that other enticements, such as cartoons and candy, could just as easily be used.

Dissenters argue that some virtual child pornography could be banned

O’Connor said that the phrase “conveys the impression” as used in the statute applies to youthful-adult pornography, which is constitutionally protected because it is plain to the viewer that there are no real children, as in cartoons or sketches.

O’Connor said, however, that the phrase “appears to be” essentially means “virtually indistinguishable from” an actual minor, so that viewers would not be able to tell the difference. These three justices therefore reasoned that such virtual child pornography could be banned.