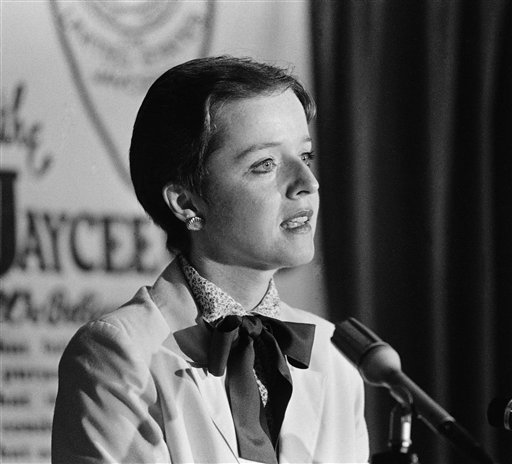 Kathy Ebert, former vice-president of the Minneapolis chapter of the Jaycees, is shown here as she addresses a 1984 press conference heralding the U.S. Supreme Court decision in Roberts v. United States Jaycees. In one of the first cases testing the First Amendment limits of anti-discrimination laws, the Court ruled that Minnesota could force the Jaycees to admit women as full members. Ebert was one of three women who filed the original brief with the Minnesota Human Rights department. (AP Photo/Jim Mone, used with permission from the Associated Press)

In a unanimous decision, the Court held that Jaycees chapters lacked “the distinctive characteristics that might afford constitutional protection to the decision of its members to exclude women.”

The United States Jaycees, an organization for young business leaders, originally accepted only men as members, but by the early 1970s it was admitting women as associate members with no voting privileges. Two Minnesota chapters sought to admit women as full members, and when the national Jaycees threatened to revoke their charters, the chapters sued under Minnesota’s public accommodations law, which banned discrimination against women by membership organizations.

Jaycees argued that admitting women would violate its right of association

In its defense, the national Jaycees organization argued that forcing it to admit women would violate its First Amendment expressive association rights. The Jaycees noted that their charter established the organization’s central purpose as “promoting the interests of young men,” and that, because of the “gender gap” in American politics, the organization’s positions on political issues might have to be altered if women were admitted.

For these reasons, a federal appeals court ruled 2-1 in favor of the Jaycees.

The Supreme Court, however, ruled against the Jaycees in an opinion written by Justice William J. Brennan Jr.

Justice Brennan construed the right of expressive association narrowly. He found that the Jaycees had presented no valid evidence that the compelled acceptance of women as members would “change the content or impact of the organization’s speech,” and even suggested that such a conclusion rested on stereotypes about gender roles.

Brennan added that the Jaycees would have lost the case even if the Court had found that Minnesota’s public accommodations law had infringed on the Jaycees’ expressive association rights. He reasoned that because the law advanced the “compelling interest” of eliminating sex discrimination, intrusion into First Amendment rights was permissible.

In her concurring opinion, Justice O’Connor distinguished between expressive associations that exist primarily for expressive purposes, and nonexpressive associations that exist primarily for other purposes. She maintained that the latter type of organizations should receive much less First Amendment protection than the former and concluded that the Jaycees, as primarily a business networking organization, fell squarely into the nonexpressive camp.

Justice Brennan’s opinion in Roberts suggested that the right of expressive association would be construed very narrowly when it conflicted with public accommodations and other anti-discrimination laws.

As a result, for over a decade lower courts have almost always ruled in favor of the government when such conflicts have arisen.

This article was originally published in 2009. David E. Bernstein is a university professor at the Antonin Scalia Law School, George Mason University, where he teaches constitutional law, among other things. He is the author of You Can't Say That! The Growing Threat to Civil Liberties From Antidiscrimination Laws (Cato Institute 2003).