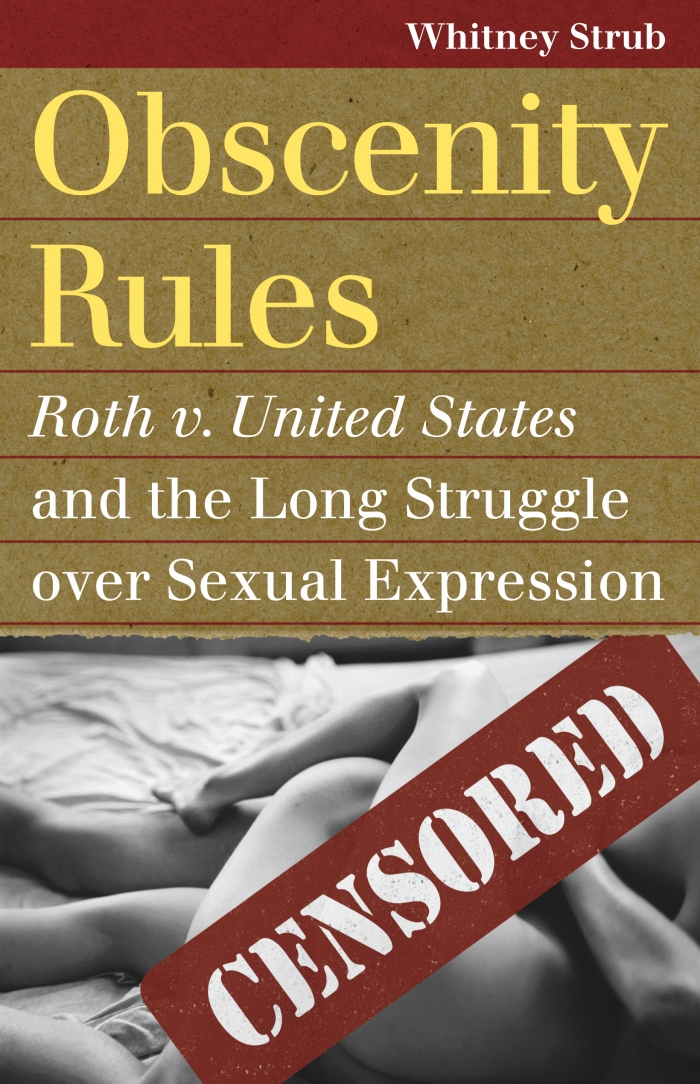 Roth v. United States, decided by the Supreme Court in 1957, resulted in a new test to determine whether something was unlawfully obscene or protected under the First Amendment. For the first time, the justices ruled that the material, applying contemporary community standards, must be, taken as a whole, considered obscene. The test was eventually refined, but the decision paved the way for broader protection of free expression. (Photo is of a book written about the Roth decision by Whitney Strub, an assistant professor of history at Rutgers University in Newark.)

The major obscenity decision in Roth v. United States, 354 U.S. 476 (1957), provided the basis for an important test that the Supreme Court used to determine whether material was obscene or constitutionally protected.

The Court had long held that there were a few types of expression that merited no First Amendment protection. In this category the Court placed obscenity, libel, and “fighting words.” The problem for the Court and the legislatures that might try to prohibit these forms of expression was the need to define what was obscene or libelous. Roth was the decision that started the Court on the path to defining what constituted obscene material.

Samuel Roth had been indicted for violation of a federal obscenity statute. Roth was charged with sending obscene materials through the mail. A jury found him guilty.

Prior to this case, the Supreme Court had been using a precedent from a British case, Regina v. Hicklin (1868). Under the Hicklin test, if any part of the material was considered obscene, then the publication as a whole was considered obscene. There was no provision for the potential social or artistic value of the material. That standard was very restrictive and left a wide range of materials unprotected.

Justice William J. Brennan Jr. fashioned the test that ultimately would become known as the Roth or Memoirs test, based on a subsequent case that built on Memoirs v. Massachusetts (1966).

The target now was the average person, applying contemporary community standards. Eventually, the community standards became national rather than local. An important component of the new test was that the material, taken as a whole, must be considered obscene.

In subsequent decisions, Jacobellis v. Ohio (1964) and Memoirs, the Court refined the test by adding that to be considered obscene the material must be utterly without redeeming social value.

Although the decision would pave the way for a broader protection of free expression, the opinion met with considerable resistance. Certainly those who thought that it was too permissive a standard objected. But there was opposition from others, like Justice William O. Douglas, who argued that Brennan’s attempt to try to delineate a distinction between obscene and protected material would boomerang.

Douglas’s prophecy would turn out to be correct. Douglas, much more of an absolutist on First Amendment issues, felt everything should be protected. Brennan would migrate closer to that stance as it became clear his initial position was untenable. In his dissent in Paris Adult Theatre I v. Slaton (1973), Brennan changed his position, believing that obscenity laws as applied to consenting adults were simply too vague to satisfy First Amendment concerns.

The impact of the Roth/Memoirs test was pronounced on a number of levels. First, it became very difficult to get a conviction for obscenity. Second, the Supreme Court was forced to micromanage the issue and had cartons of movies, books, and magazines to review. Finally, the Court became increasingly fractured over the issue to the point that there was seldom a majority opinion. In most instances, justices would engage in dissenting and concurring opinions that would muddy the already confusing issue. The Court had to add a variety of exceptions to the test to protect children and to punish those whose exploitation of such material was only for pandering to the basest interests.

Ultimately, the Court would effectively overturn the Roth/Memoirs test in Miller v. California (1973) by removing the “utterly without redeeming social value” prong and changing the community standards to the local level.

Richard L. Pacelle Jr. is a professor of political science at University of Tennessee.