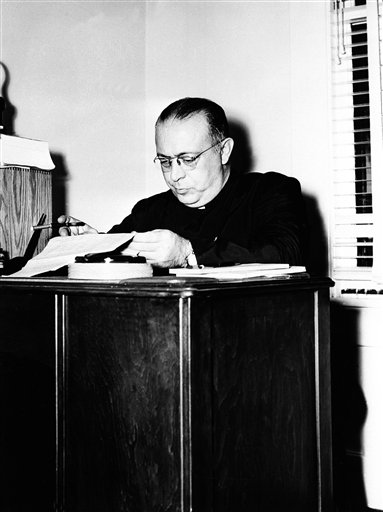 In Terminiello v. Chicago (1949), the Supreme Court overturned on First Amendment grounds a disorderly conduct conviction against a suspended Catholic priest for making inflammatory public comments. In this photo, Rev. Arthur Terminiello, assistant pastor of St. Stephen's Catholic Church, reads dispatch at Pensacola, Fla., May 16, 1949 of U.S. Supreme Court's ruling which cleared him of disorderly conduct charges growing out of a speech delivered in February, 1946. (AP Photo, used with permission from the Associated Press)

Priest arrested for a speech that caused a riot

In Chicago during a meeting of the Christian Veterans of America, Father Arthur Terminiello addressed a crowd in an auditorium, along with a crowd outside the auditorium protesting the meeting. In his speech, Terminiello attacked Jews, President Franklin D. Roosevelt and first lady Eleanor Roosevelt, Communists, and others. The crowd outside reacted by breaking windows and hurling rocks at the auditorium doors. Police arrested Terminiello for violating a city ordinance establishing that “misbehavior may constitute a breach of the peace if it stirs the public to anger, invites dispute, brings about a condition of unrest, or creates a disturbance.”

Illinois courts upheld the conviction, but a 5-4 majority of the Supreme Court reversed. In the majority opinion, Justice William O. Douglas focused not on the content of the priest’s speech, but on the legality of the Chicago ordinance. The Court ruled that by permitting conviction for speech that “stirred people to anger, invited public dispute, or brought about a condition of unrest,” the law “seriously invaded” the protection of speech afforded by the First Amendment. “A function of free speech,” Douglas wrote,“under our system of government is to invite dispute.” Speech “may indeed best serve its high purpose when it induces a condition of unrest, creates dissatisfaction with conditions as they are, or even stirs people to anger.”

The justices in the minority, notably Robert H. Jackson, filed vigorous dissents. Jackson’s 24-page opinion lambasted the majority’s four-page opinion and chided the majority for failing to uphold the conviction based on the fighting words doctrine. He cited Terminiello’s attack on the protesters as “ ‘slimly scum,’ ‘snakes,’ ‘bedbugs,’ and 'the like’ ”and noted that the priest had hurled his comments “at an already inflamed mob.” Jackson concluded his dissent with a veiled warning: “There is a danger that, if the Court does not temper its doctrinaire logic with a little practical wisdom, it will convert the constitutional Bill of Rights into a suicide pact.”

In contrast to the decision in Terminiello, two years later in Feiner v. New York (1951) the Court upheld the conviction of a college student charged with causing a breach of the peace after refusing police requests to stop addressing an unruly crowd.