Simon and Schuster v. Members of the New York State Crime Victims Board (1991) 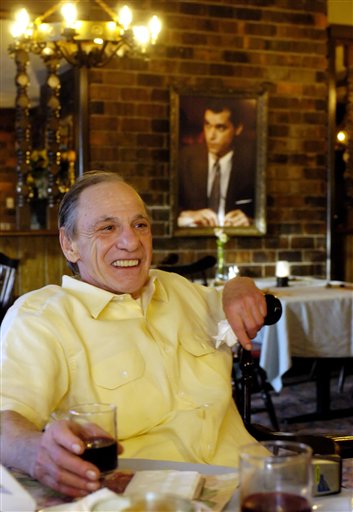 In this photo, Henry Hill sits in a restaurant in Nebraska in 2005. The exploits of Hill, who sought refuge in the witness protection program after agreeing to testify against his former mob bosses from New York, were the basis for a book about his life. The state of New York tried to acquire the proceeds from the book under Son of Sam laws prohibiting criminals from profiting from their crimes, but the Supreme Court said the law violated the First Amendment. (AP Photo/Nati Harnik, used with permission from the Associated Press)

The Supreme Court decision in Simon and Schuster v. Members of the New York State Crime Victims Board, 502 U.S. 105 (1991), determined that the state of New York’s “Son of Sam” laws were a violation of free speech under the First Amendment.

In 1977 the “Son of Sam” killer, David Berkowitz, made national headlines for a second time by earning large profits on the sale of his memoir about the murders that made him infamous.

Public outcry was strong, and state and federal legislators enacted “Son of Sam” laws to prevent criminals from profiting from the stories of their crimes. These laws redirected any profits derived from the sale of memoirs or criminal admissions to the victims of those crimes.

In 1986 publishing company Simon and Schuster contracted with Henry Hill, a mobster-turned-informant, for the publication of a book based on Hill's life by Nicholas Pileggi, Wiseguy: Life in a Mafia Family. The book sold well and was later adapted to the movie screen as Goodfellas. After publication of the book, the New York State Crime Victims Board notified Simon and Schuster that it was violating New York’s “Son of Sam” law.

Specifically, New York’s law provided for the creation of an escrow account into which profits from the sale of a criminal’s description through any media outlet of his or her crimes or his or her “thoughts, feelings, opinions or emotions” regarding such crime were placed for five years.

During that time, victims of the crimes could recover a portion of the profits. Simon and Schuster sued the Board claiming that the law violated the First Amendment. The district court and the Second Circuit Court of Appeals upheld the statute.

In an 8-0 decision authored by Sandra Day O’Connor, the Court unanimously reversed the lower courts’ decisions. (Justice Clarence Thomas did not participate.)

The Court held that the statute was content-based and therefore “presumptively inconsistent with the First Amendment” and subject to strict scrutiny.

Through the two-pronged review, the Court held that the state had a compelling interest in “depriving criminals of the profits of their crimes, and in using these funds to compensate victims,” but the statute was not narrowly tailored to achieve the compelling interests.

The statute was overbroad in its application, affecting criminals who were never convicted of their crimes as well as those who were convicted and “works on any subject, provided that they express the author’s thoughts or recollections about his crime, however tangentially or incidentally.”

Justice Harry A. Blackmun wrote separately in a concurrence that the statute was also underinclusive. Justice Anthony M. Kennedy agreed that the statute violated the First Amendment, but argued that the law was flatly unconstitutional as a content-based restriction on political speech.

Other courts have invalidated Son of Sam laws

Although the Court’s decision in Simon and Schuster established the precedent that governmentally imposed financial restrictions on speech could be just as unconstitutional as express prohibitions, public outrage may still serve to dampen such speech.

This was indicated by the public outcry that greeted the announcement in 2006 that Harper Collins would publish a book by O.J. Simpson, entitled If I Did It, describing how he would have killed his former wife, Nicole Brown Simpson, and Ronald Goldman if he had indeed committed the murders. (Simpson had received a not guilty verdict in a criminal trial but had lost a civil suit for damages.) Editor Judith Regan was subsequently fired for her participation in the project.

This article was originally published in 2009. Virginia Vile Tehrani is an attorney at Greenblatt & Veliev, LLC.